How to send and receive altcoins through multicurrency wallets?

After deciding which wallet to use, all that’s needed is to put in the public address recipient when sending cryptocurrencies or to send out the address to the sender as a recipient. This can often be as easy as scanning a QR code and typing in the cryptocurrency amount.
Of course, the process of sending and receiving cryptocurrencies can differ slightly between wallets as each wallet has a different interface. However, there are a few general guidelines that are the same with all wallets:

Log into your wallet – Some wallets may have a 2FA (two-factor authentication), PIN code, phone verification or other kinds of security options enabled;
Go to the send/receive screen depending on whether you are sending or receiving cryptocurrency (that’s simply done by clicking the tab or button that says “send” or “receive”);
Choose whether you want to send or receive cryptocurrency. It is important to know that even though wallets can support many cryptocurrencies, each address is bound to one cryptocurrency (unless the coins are Ethereum tokens or a part of a similar ecosystem). This means that Bitcoin can only be sent to a Bitcoin address, Litecoin to Litecoin, XRP to XRP etc.
When sending: Enter the public wallet address (of the corresponding cryptocurrency) of the recipient and choose the amount that you want to send them. The specified amount should also include transaction fees. After double-checking and confirming that the address is correct (as a mistake cannot be undone after sending), click send and the transaction is done.
When receiving: Receiving cryptocurrencies is as simple as sharing the public wallet address (for the coin that will be sent) with the sender. It is even easier in person, as the sender can scan the QR code right from the recipient’s wallet.
Cryptocurrency transaction tips and tricks
Before sending a lot of cryptocurrencies, it’s good to try sending a small amount to the address as a test to make sure everything is working properly.

Sending and receiving cryptocurrency on/from exchanges might be a bit different than how simple wallets work. Sending between exchanges will require using the “withdraw” and “deposit” buttons on the exchange which will be located right next to the token. Each exchange has its own protocol which has to be followed. This means that directions must be followed carefully, as exchanges might require senders to include a message in the transaction or to send a whole number of the coin/token. They will also most likely require some form of transaction verification (2FA, email verification or phone verification). 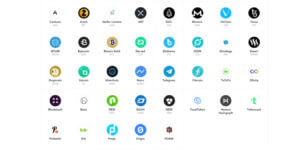 ERC20 tokens are cryptocurrencies made on the Ethereum protocol and they are a bit different than other altcoins. These tokens are compatible with the Ethereum protocol as they follow the ERC20 guidelines. To send any ERC20 token to another wallet, the sender has to hold enough Ether to cover the transaction fees. Transaction fee depends on the complexity of the transaction. This fee is called Gas.
Other than the fact that each ERC20 wallet needs to have enough Ether to cover transaction fees, there is no other difference from the other altcoins wallets.

One big thing to point out when transacting cryptocurrencies is to never share private keys. Private keys should be differentiated from public keys and should never be seen by anyone other than the account owner. Sharing it would be the equivalent of sharing the wallet password with a stranger.