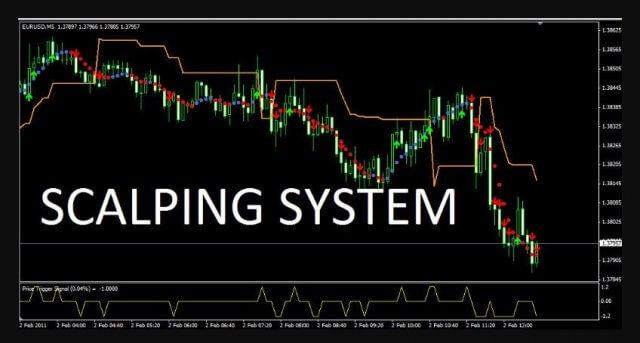 There are many discussions in the world of the foreign exchange market, and for some time there have been about the strategy of scalping in forex of “10 pips a day”. It is a trading strategy that says “get rich quickly” by accumulating only 10 pips each day. Well, we turn to you to inform you that not only will it not make you rich, but it will probably ruin your trading account if you give it enough time.

The lure of this system of scalping in forex is the perception that making 10 pips a day can accumulate large fortunes in a relatively short period of time. Because, as those who promote these strategies will tell you, it is easy to achieve this amount every day. But 10 pips each day should be feasible, right? Theoretically, yes. But as we already know, be consistently profitable in the Forex world is not a theoretical effort, but a practical one.

In this article, we will see the controversial question of making only 10 pips in each trading day and why it does not work. Accordingly, you will need to learn a way to set performance goals that include the benefits as well as the risk taken to make those gains. But first, let’s discuss this 10 pips a day forex scalping methodology in greater detail.

What is the strategy of scalping in forex of 10 pips a day?

The idea behind this strategy is to aim for quick gains every day. As the name says, the goal is to achieve a gain of 10 pips every day. This sounds pretty simple, and in theory, it should be. But again, making a profit from the forex market is not theoretical.

Most strategies running around, which point to a small number of pips each day also carry a long stop loss. At least long compared to the potential nominal profit of each setup. This scalping strategy in forex is no exception. This is something distant from what we usually do, which aims at an appropriate risk-benefit of at least 1:2. Most strategies that aim to get 10 pips use a stop loss of 90 pips or larger. In essence, they take a huge risk for a small reward, relying on a high winning transaction ratio. And there lies the problem.

Some traders like strategies like this, and the reason is simple, they produce fast profits and promise high hit percentages. As we all know, winning is fine. Remember how you felt after your last trade winner operation. Or better yet, a series of winning operations. It feels good, doesn’t it?

Don’t feel bad after a victory operation. You do your job to find a favorable setup, which resulted in a profit. However, something is not right when you choose a system just because it induces a feeling of winning more often. Or at least that is the intention of the scalping strategy in forex.

As you can see, becoming a successful Forex trader does not mean winning, it means being consistently profitable. It is very clear that we have a big difference between these two issues. When you choose a trading system that is based on the success rate, you are letting your ego make the decision for you. Your ego wants a trading strategy that gives you that nice “win” feeling.

The logical side of your head wants a trading system that will grow your account. It is also the logical side that knows that it takes a lot of time and practice to become consistently profitable. Your ego wants the profits now and it doesn’t care how much capital he has to risk to get it.

Before we start talking about why the 10 pips a day forex scalping strategy is disastrous, we want to make one thing clear:

We’re not discrediting all scalping strategies. We know some of them to work. But what we are discrediting is the idea that you can target a specific number of pips every day, week, or month and “get rich quickly,” as stated by those who promote these strategies. It is nothing against this particular strategy, we are just using it as an example.

Now, let’s talk about why a strategy like this is dangerous.

Unfavorable risk-benefit ratio: The foundation of a system like 10 pips a day is a high probability of success. Therefore, this means risking a huge amount of pips for a relatively small profit.

Let’s use the example of 10 pips of take profit and 90 pips of stop loss. In order to be in “breakeven” in this strategy, your goal should be reached 90% of the time. That means out of 100 operations, you’d need 90 with winnings.

This is a high and unrealistic hit ratio for any trading strategy. And that would be just to keep the balance, that is, not to lose or win. If you want to make a profit, you need to make more than 90% of the time. Think about it this way: you have 2 consecutive weeks of earnings, achieving your goal of 10 pips each day. Then, for 10 days of trading, you have got 100 pips. At the end of those 10 days, you feel unstoppable.

On the 11th, the disaster hits. Your stop loss is hit, with a loss of 90 pips. So, after 11 days of trading, you make a profit of 10 pips. Demoralized and frustrated, you’re looking for a new strategy that will make you a millionaire. Does that sound familiar? This is the vicious circle in which most traders live and is the reason why using unfavourable risk-benefit ratios can be dangerous for your career as a forex trader.

Expectations that are unrealistic: Any trading system that is based on a fixed number of pips within a specific time period as a goal is a disaster waiting to occur.

The market moves with its own calendar. Every week is different, just like every day, hour and minute is different. A couple of currencies will not give you exactly the same kind of movement day by day or week by week. So why wait for the same amount of profit every day, every day? It just doesn’t make sense.

The market does not follow your calendar. To become a consistently profitable Forex trader must learn to take what the market gives you. This could mean not operating for a day or even a week. To say that a market will move in a way that produces 10 pips of profit every day is completely unrealistic.

Let’s show you how to set performance targets that are achievable while taking risk into account. This can be applied to any trading strategy you want. To achieve this, you need to use 2 steps to track your performance. The first step should be your profit percentage. This will be the amount you aim to achieve each month. We recommend starting at some point between 5% and 10%.

This is a realistic expectation and has real value. You know exactly how much it should be equivalent to 5% – 10% based on the size of your account. If you just aim at 400 pips a month, for example, who knows how much each pip is worth? It could be $1 or it could be $10. Using a percentage of profit is setting a performance target with real value.

The second measure needs to take into account the risk. After all, 5% – 10% profit is great, but if you’re risking 20% to make it, that’s not good. For this measure we will use a multiple of “R”. What is this? you will wonder. Simply take your goal profit in pips and divide it by your stop loss also expressed in pips. For example, a target of 300 pips with a stop loss of 100 pips would be 3R.

So, the goal for your second measurement would be to maintain a minimum 2R average for the month. This forces you to look for favorable setups, in which the potential reward is at least twice as risky.

There you have it. Instead of aiming at an arbitrary number of pips per month, it aims at a profit between 5% and 10% per month, while maintaining a minimum average 2R. Now you have a goal that will produce profits while taking into account the risk taken to produce such profits.

That’s what it takes to be a consistently profitable trader.

At the end of the day, “10 pips a day” Forex scalping strategies are not the problem. At least they are not the root of the problem. The problem is the idea that the earnings in the forex market can be programmed into a calendar. Be it 10, 20, or 30 pips a day. The market does not care, nor will it move in a way that produces this kind of profit every day.

You could say that this is just our opinion, and you’d be right. But when was the last time you heard a professional forex trader say he had enough surgery for today, because he had reached his goal of 10 pips? Do you think George Soros or Bill Lipschutz operate forex like this? Of course not. In fact here is a verbatim quote from Bill Lipschutz himself:

“For long-term operations, especially when multiple-option structures are at stake and some capital may need to be used, I look for a profit-on-loss ratio of at least 5 to 1.”

This article has not been written to imply that the only way to make a profit from forex is to use a minimum of 2R in each transaction. Or that price action is the only viable trading strategy. As we all know, that is simply not true.

However, this article brings to light that the idea of risking 90 pips to earn 10 and expecting the market to deliver those 10 pips of profit more than 90% of the time is unrealistic. We dare to say… impossible?