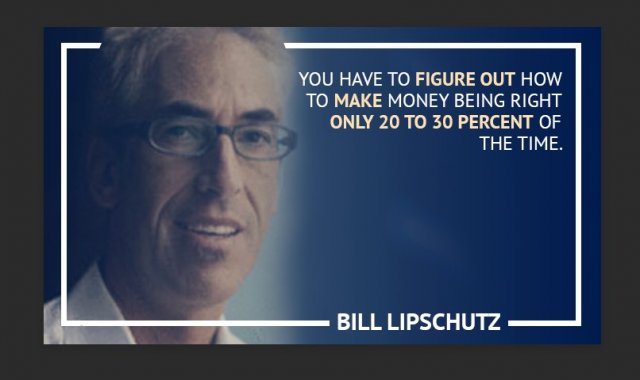 If you Google “top forex traders” or anything close to the phrase, Bill Lipschutz is bound to be on the list. This professional trader was born in Farmingdale, New York, and began his trading career while attending Cornell University. He earned a bachelor’s degree in Fine Arts while simultaneously enrolled in business classes and also walked away with an MBA in finance back in 1982. Bill’s strong background education undoubtedly contributed to his success with trading forex. Lipschutz is one of many professional traders that can serve to inspire us all; however, this big-league trader learned a very important lesson early on in his career.

Everything began when Bill inherited $12,000 worth of stock after his grandmother died. It’s true that many others might not be lucky enough to inherit a large sum of money, but it is still possible to follow in this traders footsteps by starting small, saving up, or waiting until you receive a larger sum of money from taxes or other events so don’t feel discouraged by his large start-up fund. Remember that you can open a trading account with as little as $5.

Eventually, Lipschutz managed to turn his inheritance into $250,000 after spending countless hours researching the stock market in his free time. While we’d hope for a happy ending, things didn’t go so well from there. Bill lost his entire portfolio balance on a single bad decision when the market turned on him. A failure to use appropriate risk-management precautions contributed to this large loss when it could have been reduced to a less devastating blow. After countless hours working to build his investment, everything was gone. This is the point where many traders would give up, closeout their accounts, and turn away from trading for good.

Fortunately, Bill Lipschutz only became more interested in trading after learning this huge lesson from his early mistake. He went on the work for the newly formed Foreign Exchange department through Salomon Brothers with a plan to learn about currency trading. In 1995, he formed his own company named Hathersage Capital Management with some of his previous classmates. Today, he is regarded as one of the top 5 forex traders with an unknown net worth, although he was once making $300 million per year.

In a nutshell, this story is quite inspiring with a lesson behind it. A college-educated person receives an inheritance, decides to invest it into the stock market, and increases his investment by more than $238,000. Then, one bad decision wiped out everything in a move that would have caused most to give up on trading for good. Instead of walking away, Bill Lipschutz became more inspired, continued investing, went on to make $300 million per year for the company he was working on, and later went on to create his very own investment company. We can learn the following lessons from this millionaire’s success story:

Bill Lipschutz teaches us a good example of how determination can pay off when it comes to trading forex. Even if you get off to a rough start, it doesn’t mean that you can’t be one of the best traders out there someday. Learning this valuable lesson in risk-management and motivation should be an inspiration to us all, so remember to think of Bill Lipschutz anytime things don’t go in your favor.