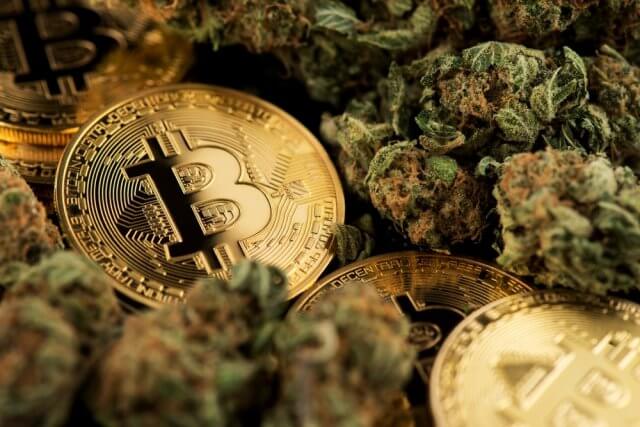 The marijuana and cryptocurrency industries are two industries that each, in its own way, has been battling for recognition since its very inception. Marijuana is still largely seen as a harmful substance that ought to be criminalized, only seeing a bit of legal light recently when states began to recognize it as medically beneficial. Cryptocurrency, on its part, is still very much under the water in terms of mainstream acceptance.

These two also face the same major issues; their legal status is shaky at best, and they have a regulatory crackdown nightmare constantly hanging over them.

It’s no surprise, therefore, that the two industries are using each other to gain legitimacy and shatter barriers.

It certainly would be fun if we had marijuana cryptocurrencies just for the sake. The truth is that this class of cryptocurrencies emerged to fill a real need. In the US, marijuana is still considered illegal at the federal level. For this reason, banks and other financial institutions have given the marijuana industry a wide berth.

What this means for marijuana businesses is that they can’t get business loans, conduct transactions, and so on. Marijuana customers also cannot purchase products in a completely free environment.

Cryptocurrencies, known for their privacy of transactions, are the perfect solution for this scenario. Instead of risking prosecution or being shut down, marijuana sellers can exchange money with less hassle as well as faster and in a more secure fashion.

Match Made in Heaven

There perhaps isn’t a better-suited relationship between two industries than the marijuana and cryptocurrency industry, and a big reason for that is that they’re still outliers, or at least considered so by the government and media.

Like we’ve mentioned before, their legal status is still largely grey. They’re both encumbered by legal, political, and regulatory challenges. Their user base is also a lot alike, with each having a bigger share of the younger demographic than, the older one.

Let’s look at the challenges facing each.

A decade later, cryptocurrencies may be the investment of choice for thousands, but they’re still very much seen as belonging in the fringes of the financial world. Part of this is due to their decentralized and peer-to-peer nature that makes them immune from state interference. Naturally, governments and regulators will handle them with a huge dose of skepticism.

The other is their reputation as the currency for crime. Bitcoin’s Silk Road saga, where the currency was used for all manner of cringe-worthy transactions, did nothing for the overall reputation of the industry.

Another reason is cryptocurrencies are yet to make a dent when it comes to day to day transactions. This is due to their novel nature, as well as their wild volatility, which renders them unsuitable for daily purchases. As such, very few merchants or businesses are willing to accept them. Also, banks are not exactly itching to start accepting them as a valid currency.

On its part, cannabis is far from receiving full legal recognition. Despite years of agitation for its legalization by fans, it’s still not legal at the federal level, it’s still viewed skeptically and its use is still stigmatized. Banks are also hesitant to handle anything cannabis due to sticky legal issues.

This state of, uh, limbo for both industries and their similarities gives them the perfect template to work together.

Cannabis operators and users can rely on cryptocurrency to conduct transactions outside regulatory clampdown and censorship. And crypto gets a ready-made group of user base and adopters, demonstrating that indeed, the currency is as viable as any other. After all, if it can power the marijuana industry and facilitate secure transactions, why wouldn’t it do the same for other industries?

What are the Impacts of Cryptocurrencies on the Marijuana Industry?

Cryptocurrencies have heralded a new age for the marijuana industry, from small business owners to farmers.

Aspiring marijuana businesses now have a chance to get off the ground more easily, and marijuana customers can purchase the product more discreetly.

Marijuana farmers are also using crypto to facilitate purchases and the sale of products, from oils to flowers, in a secure and safe environment.

What are Some of the Popular Marijuana Cryptocurrencies?

Below are some crypto projects proudly waving the marijuana flag:

Launched in 2014, PotCoin was one of the earliest cannabis cryptocurrencies to enter the scene. Its debut was pushed by Colorado’s legalization of marijuana, with the creators seeking to capitalize on the opportunities that would open as a result. It first started out as a solution for the trouble cannabis users faced when transacting in the product, even installing a PotCoin ATM in a marijuana dispensary in the state.

However, the coin didn’t pick enough traction, remaining in the back water until 2017. Its involving of former basketball star Dennis Rodman in marketing efforts might be what finally got it some worthwhile attention. Keen watchers of the crypto space remember when the project released a video and photo of Rodman in North Korea wearing a potcoin.com T-shirt. This little stunt wasn’t so little, going by the fact that the coin gained by 76% in just one day.

DOPE is a 2014 creation of Adam Howell, and is a “digital currency for marijuana enthusiasts,” according to its website. Also, users can transact in a pseudonymous environment in under a minute, without incurring costs.

The coin seems to be branching out beyond marijuana, however, stating: link “Instead of focusing solely on the marijuana industry, we have expanded our reach to include all blacklisted industries, including marijuana, crypto, vape/e-cig, gambling/betting, big pharma, alcohol and more.”

HempCoin, also launched in 2014, is a project that aims to help the agriculture industry adhere to compliance and regulatory rules and avoid losses. It helps track products through the “entire seed to scale” process through a “grow diary app, audit trail programs, and asset tracking tools.

On the THC platform, farmers of whether “Hemp, Bananas, Corn or Tomatoes can track every aspect of the farming process including location, yields, and a list of everyone who interacted with a particular plant or product.

Developed in 2014, this is a marijuana proof-of-work, peer-to-peer cryptocurrency that aims to streamline payment processing for marijuana dispensaries.

According to Coinmarketcap, the coin is trading at $0. 008021 currently, with a market cap of $619,475, a circulating and total supply of 77 million CANN, and a total 92 million CANN, respectively.

KUSH is a cryptocurrency that aims to facilitate a smooth supply chain for the marijuana industry, from land acquisition to farming, harvest, transport, delivery, and just the overall growth and sale process of the product.

Like much of the cryptos involved with cannabis, KUSH was developed in 2014 to streamline processes in the industry and provide a safe and private channel for cannabis consumers.

ParagonCoin traces its beginnings to PargonSpace, a co-working space for entrepreneurs in Los Angeles. The company then came up with ParagonCoin as a currency for payment of rent and other services and products in the Paragon premises.

As you’ve already guessed, the project has now set its sights on the cannabis industry and plans to facilitate seed-to-sale tracking of Cannabis products so as to help farmers with regulatory compliance.

By their existence alone, these coins are making a statement that both cryptocurrency and marijuana industries are forces to be reckoned with.  Considering the contention with which they have both been treated, the pair can bring out the best in each other and prove their legitimacy to the world.