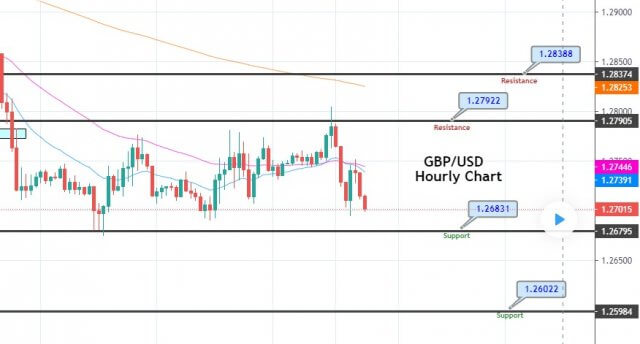 Today in the European trading session, the GBP/USD currency pair stopped its early-day winning streak and gained some bearish traction around 1.3165 level, mainly due to the broad-based US dollar strength. That was supported by the renewed hopes of the US next round of fiscal stimulus measures. Apart from this, the cautious market sentiment, triggered by the US-China tussle, also underpinned the US dollar and contributed to the currency pair gains. Furthermore, the concerns about the second wave of coronavirus infections also gave support to the US dollar and dragged the currency pair down.

On the contrary, the optimism over a post-Brexit transition trade deal and UK Sunak’s furlough scheme offers could be considered as one of the key flappers that helps the currency pair to limits its deeper losses.

As we all knew, the market trading sentiment was flashing green during the Asian session, but the gains were short-lived, and the market started to turn sour, possibly due to the intensifying US-China tussle. At the US-China front, Sino-US’s tensions picked up further pace after the US Justice Department raised its voice against China’s WeChat app. As per the keywords, “He forced the San Francisco federal judge to permit the government to ban Apple Inc and Google from offering WeChat for download in the app store”. This, in turn, boosted the safe-have assets like including the US dollar.

At the USD front, the broad-based US dollar succeeded in stopping its previous session losses and edged higher during the European session amid mixed sentiment in the market. Moreover, the US dollar gains could also be attributed to the optimism over the US stimulus deal, which eased concerns over the US economic recovery and underpinned the American currency. It is worth reporting that the US Congress may break a months-long deadlock to agree on the next round of fiscal stimulus measures, which helped ease the market fears over the second wave of COVID-19 infections. However, the US dollar’s fresh gains become the key factor that kept the currency pair down.

On the contrary, the British Pound failed to keep its earlier gains, which were supported by the reports suggesting the UK’s Finance Minister Rishi Sunak set up measures in its job protection scheme, as the country facing the second-wave of coronavirus-induced restrictions. Besides this, the optimism over a post-Brexit transition trade deal could be considered one of the key factors that help the currency pair limit its deeper losses. As per the latest report, the Bank of England (BOE) Governor Andrew Bailey repeated that trade deal would be beneficial for both the UK and the EU.


Moving ahead, the market traders will keep their eyes on the US economic docket, which will show the release of Durable Goods Orders. Meanwhile, the USD moves and coronavirus headlines will also closely follow to play a key role in the currency pair.

The cable is consolidating in a sideways trading range of 1.2770 to 1.2725 level, as it has formed an ascending triangle pattern on the hourly timeframe. A bullish breakout of 1.2770 level can lead the Sterling price towards 1.2819 level on the higher side. Selling bias will be more substantial below the 1.2772 level. Good luck!