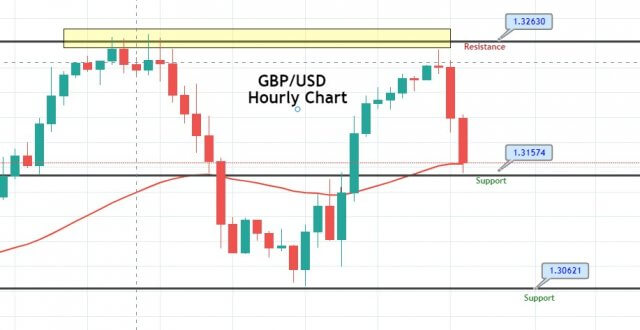 The GBP/USD gained positive traction for the second straight day and refreshed the intra-day high around 1.3240-50 level, mainly due to Friday’s upbeat U.K. Retail Sales, which initially underpinned the Pound and contributed to the currency pair gains. On the other hand, the broad-based U.S. dollar fresh weakness, backed by the downbeat U.S. jobs data, also exerted a bullish impact on the currency pair.

On the contrary, the Brexit talks’ lack of progress limited any additional gains in the currency pair. At a particular time, the GBP/USD currency pair is currently trading at 1.3200 and consolidating in the range between 1.3200 – 1.3255.

Across the pond, the uncertainty over the next round of the U.S. fiscal stimulus measures, and the unexpected rise in the U.S. Initial Weekly Jobless Claims, both factors have fueled the concerns about the U.S. economic recovery. At the data front, the U.S. showed that 1.106 million Americans claimed unemployment benefits during the previous week, exceeding the anticipated 925,000 claims as well as last Thursday’s 971,000 figure.

In the meantime, the U.S. House Speaker Nancy Pelosi recently took a U-turn from her previous positive remarks over the COVID-19 relief bill and said that it was not the right time for a small stimulus package. In turn, this undermined the already weak U.S. dollar and remained supportive of the bid tone surrounding the GBP/USD currency pair.

At the Brexit front, the Brexit talks’ lack of progress kept the currency pair trader cautious. It is worth recalling that the 7th-round of Brexit talks failed to give any clue over the tough issues like fisheries and a level playing field. Looking forward, the market traders will keep their eyes on the UK PMI prints for some significant direction in the pair. As well as, the U.S. preliminary readings of August month PMIs will also be key to watch. In the meantime, the headlines concerning the US COVID-19 aid package, virus figures, and Sino-American trade can also impact the pair’s movement.

The GBP/USD is falling dramatically from 1.3157 level to 1.3060 level. It has already disrupted the upward trendline support mark of 1.3135 level. The creation of three black crows pattern reinforces robust bearish bias for the GBP/USD pair. Anyhow, we are already out at a profit and closed profit. For now, we should look for buying trades at over 1.3062 level. Good luck!