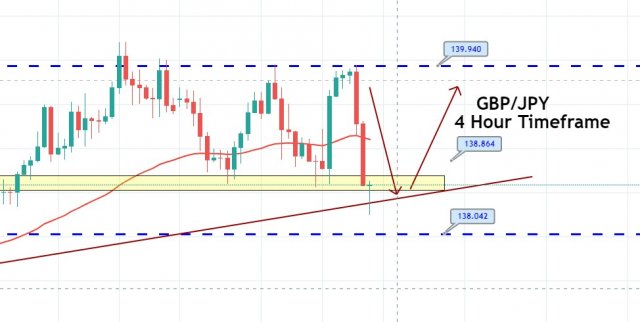 During the Friday’s European trading session, the GBP/JPY extended its previous session losing streak and dropped below the 138.600 marks mainly due to the risk-off market sentiment, triggered by the multiple worsening headlines like dismal U.S. jobs data and US-Iran tussle. This eventually underpinned the safe-haven Japanese yen currency and contributed to the pair declines.

At this moment, the GBP/JPY is trading at 138.600 and consolidating in the range between 138 – 139.90. The U.S. stock futures failed to maintain its early-day gains and turned negative, possibly due to the on-going political impasse over the shape and size of the next U.S. fiscal recovery package. The disappointing U.S. labor market data also exerted downside pressure on the market by fueling the worries over the U.S. economic recovery. At the data front, the U.S. showed that 1.106 million Americans declared unemployment benefits during the previous week, exceeding the anticipated 925,000 claims as well as last Thursday’s 971,000 figure.

The U.S. House Speaker Nancy Pelosi stepped back from her previous positive remarks over the COVID-19 relief bill while saying that the “Timing is not right for a smaller coronavirus relief bill.” This, in turn, undermined the risk-tone in the market. Also weighed on the market trading sentiment was the US-Iran tussle. Trump administration remains tough and adds worries for Iran after showing the intention to restore almost all United Nations (U.N.) sanctions. As per the latest report, U.S. Secretary of State Mike Pompeo announced that we will strongly push arms embargo and do everything to enforce them. These gloomy headlines weighed on the market sentiment and contributed to the currency pair losses by underpinning the safe-haven Japanese yen.

Apart from this, the fears of rising COVID-19 cases in the U.S., and some of the notable Asian nations like India constantly fueling fears that the economic recovery could be halt, which also underpinned demand for the Japanese yen and kept the currency pair down. However, these fears were further boosted by the Federal Reserve’s Wednesday’s comments that the path to economic recovery from COVID-19 remains highly uncertain.

The reason for the risk-off market sentiment could also be attributed to the latest U.S. rump administration statement against the Chinese commerce department’s comments that trade talks will happen soon. The Trump administration did not goes with the comments made by the Chinese Commerce Dept. spokesman Mr. Gao Feng that trade talks will resume in the coming days. However, the reason could be the long-lasting tension between both parties, leading the U.S. president to be angry with China.


During the early U.S. session, we opened a forex trading signal on the GBP/JPY currency pair at 138.900 level with a stop loss at 138.550 level. But soon, we realized that the pair isn’t likely to reverse over 138.800 support. Therefore, we decided to close the signal at a minimum loss of 9 pips. Let’s wait a bit before taking another p[osition in the GBP/JPY currency pair. Good luck!