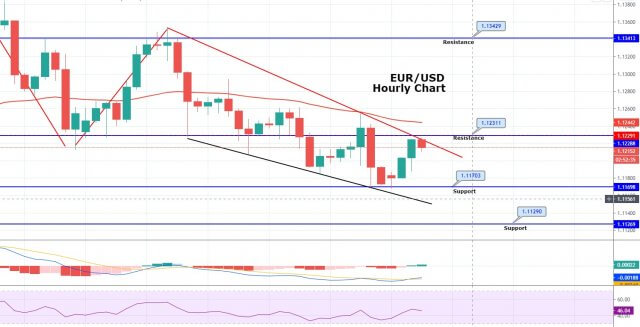 The EUR/USD currency pair extended its previous day winning streak and took bids around the 1.1311 level, mainly due to the fresh risk-on market sentiment, which undermined the broad-based US dollar and contributed to the currency pair gains. The reason for the upticks in the currency pair could also be attributed to the report that the Spanish government officials are considering pledging as much as EUR50 billion in additional loan guarantee, which underpinned the shared currency and provided support to the major.

As per the current condition, the Eurozone PMIs came out to be robust as easier lockdown restrictions bolstering business activity. Moving on, the big beat on expectations could boost the gains in the shared currency. From the technical perspective, the falling wedge breakout seen on the pair’s hourly chart suggests a rise above the psychological resistance of 1.13.

At the coronavirus front, the number of reported coronavirus cases increased to 190,862, with a total of 8,895 deaths. As well as, the cases increased by 503 in Germany on Tuesday against Monday’s +537. On Tuesday, the death count rose by ten as per the German disease and epidemic control center, Robert Koch Institute (RKI).

At the USD front, the broad-based US dollar failed to maintain its early day bullish moves and edged lower at least for now, mainly due to the fresh risk-on wave in the market sentiment after Navarro clarified that his comments were taken wrongly by the market and the phase-one pact was on track which gave a boost to the risk market and contributed to the greenback’s decline. However, the reductions in the US dollar kept the currency higher. Whereas, the dollar index, which tracks the greenback against a basket of six other currencies, was largely flat at 96.993, having climbed as high as 97.207 earlier in the session.

The market traders will keep their eyes on the flash manufacturing PMI for Germany, which is scheduled to be released at 0730 GM. The USD price dynamics will also be essential to watch for some short-term trading impetus ahead.


On the technical side, the EUR/USD is trading sharply bullish in our favor as our forex signal makes around 30 pips. The idea is to move SL at the breakeven level and enjoy the bullish run, but I suspect the EUR/USD will take a bearish recovery below 1.1345 level. Here’s a quick update on the trade signal.