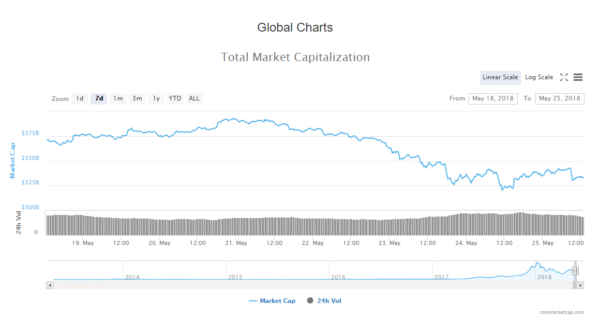 Top stories that came out in the last 24 hours are the following:

German bank Commerzbank and steel company Thyssenkrupp have completed a €500,000 pilot transaction of a forex (FX) forward on a blockchain, reported Cointelegraph auf Deutsch May 24.

Singapore’s central bank said today, May 24, that it had issued a warning to eight cryptocurrency exchanges over securities compliance and ordered an ICO to stop issuing tokens.

The South African Reserve Bank, the central bank of the Republic, has chosen to call digital currencies “cyber-tokens” because they “don’t meet the requirements of money,” Bloomberg reported May 24.

Looking at the daily chart, we can see that support baseline was respected and that yesterday’s candle closed above the support line, leaving a wick below it. Today’s candle is red and its back on the levels of yesterdays opening, as the price is retesting the support.

Zooming into the hourly chart, we can see the interaction with the baseline support. The price bounced quickly but was repealed by the wedge support line which now serves as resistance.

From yesterday’s open the price of Ethereum has increased by 3.34% coming from 588$ to 605$ where it is currently.

Looking at the daily chart, we can see that after the price spiked down to the first support, it went back up above the 0.382 Fibonacci level and is currently a doji candle with wicks from both sides. As you can see the current candle’s high is at the levels of a prior range support which now serves as resistance.

Zooming into an hourly chart we can see the interaction with the support line, and that even on the hourly chart there was a quick spike down. We can see some sideways movement as the price action is bouncing up and down between the range in which it is currently.

Looking at the daily chart, we can see that the price failed to exceed the 0.236 Fibonacci retracement level which serves as resistance, and as soon as the price hit it, it has retraced to the levels of prior range support.

Zooming on the hourly chart, we can see the interaction with the 0.236 Fibo level clearly. The price struggled to go beyond it but failed to keep up the momentum. As it entered the seller’s territory, the selling has begun.

Daily Crypto News Update: As we have seen yesterday, a strong momentum by the drop in price and the first interaction with the support levels, we are now seeing a reaction in a form of a quick bounce. Because the prices of three major cryptos are now back on the support levels of a prior range which now serve as resistance, we are either going to see buyers coming in a pushing the prices higher, which would mean that the correction has ended and that we are in for new highs, or the second and more probable scenario in which the prices enter seller’s territory and we are in for another low.