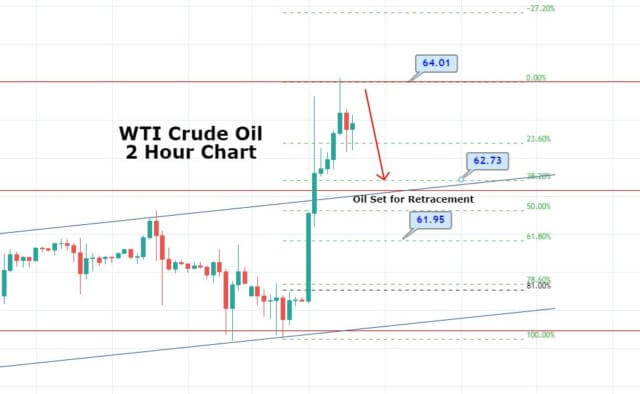 The WTI crude oil prices continue to increase, mainly due to intensifying tension in the Middle East. The U.S. Crude Oil WTI Futures jumped 2.9% to $62.98 yesterday.

Reports came from the Middle East that the airstrike killed key Iranian and Iraqi military, and consequently, the tension increased as well as the concerns of crude oil supplies diruption increased too, so that’s why oil markets are hugely supported today.

On the other hand, the WTI crude oil prices gained support from the announcement of the People’s Bank of China that it was cutting the amount of cash that banks must hold in reserve, releasing around 800 billion yuan ($115 billion) in funds to support the slowing Chinese economy.

Meanwhile, the Positive data that showed China’s production activities business confidence rose. President Trump is expected to take a break on being ‘tariff man’ until we get beyond the presidential election in November. Besides this, Trump said a phase one trade deal would be signed on Jan. 15 at the White House.

Meanwhile, the sentiment around the oil markets remains underpinned by the US-China trade deal optimism and declining US crude inventories, as reported by the American Petroleum Institute (API) earlier this week. The API data showed a draw of 7.8M barrels of oil for the week ending Dec. 27.

For now, the WTI barrel now awaits for the weekly US Crude Stocks data due to be published by the Energy Information Administration.

The WTI crude oil is holding in the overbought zone at 63.50, having an immediate resistance around 64 and support at 62.75. The U.S. Oil has already completed 23.6% Fibonacci retracement at 63.15.

In case, the EIA reports another draw in U.S. Oil stocks; we may see further buying in crude oil prices until 65. Alternatively, the oil may extend the bearish trend until 62.75, which marks a 38.2% Fibonacci retracement level. All the best!