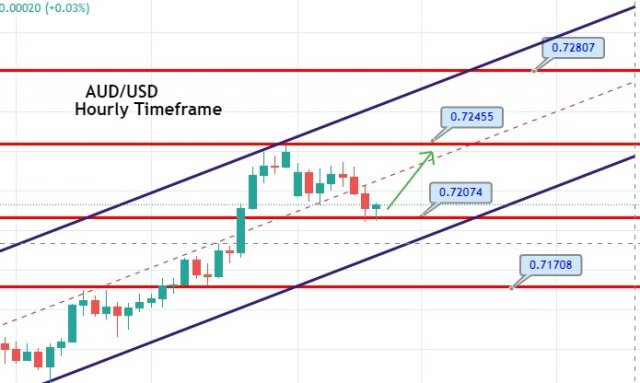 The AUD/USD failed to stop its early-day losing streak and dropped to 0.7213 level, mainly due to the broad-based U.S. dollar strength, backed by the stalled stimulus talk. Apart from this, the fears of a hard Brexit and surge in the coronavirus (COVID-19) fears from Europe keep challenging the market risk-on tone, which undermined the perceived risk currency Australian dollar and contributed to the currency pair gains. On the contary, the market risk-on sentiment, supported by the vaccine hopes helped the currency pair to limits its deeper losses. At the press time, the AUD/USD is trading at 0.7230 and consolidating in the range between 0.7213 – 0.7236. Moving on, the progress in the currency pair is expected to remain sluggish amid the U.S. holiday.

The market risk-on sentiment faded after the House Speaker Nancy Pelosi rejected Friday’s U.S. President Donald Trump’s aid package proposal of $1.8 trillion. Apart from this, the on-going surge in the COVID-19 cases from the U.K. and Europe and the no-deal Brexit fears also weighs on the market risk sentiment, which undermined the perceived risk currency Australian dollar and contributed to the currency pair gains. As per the latest report, the no-deal Brexit is gradually gaining momentum as the European Union (E.U.) and the U.K. are still at loggerheads, despite being near the October 15 deadline.

Across the pond, the latest figures from Europe and the U.K. keeps leading the national lockdowns. As per the latest report, France reported record 27,000 new cases with German infections surging by the most since April, which kept fueling the worries over the global economic recovery and kept the currency pair under pressure.

As a result, the broad-based U.S. dollar succeeded in stopping its early-day losses and took the fresh bids on the day. However, the U.S. dollar gains could be temporary as worries over the economic recovery in the U.S. could be stopped amid the reappearance of coronavirus cases and U.S. post-election uncertainty.

The People’s Bank of China (PBOC) set the financial institutions free from the need to set aside cash when purchasing F.X. for clients through forwards. These moves could negatively impact the Chinse currency as the same moves were taken in September 2017, which resulted in over 2.0% drop of the Chinese yuan (CNY) during the following three weeks. Thus, any Chinese currency loss tends to undermine the Australian dollar as China is the biggest customer in Australia.