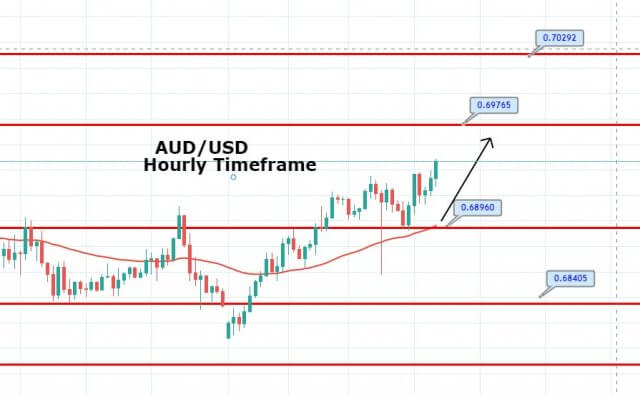 During Tuesday’s European trading session, the AUD/USD currency pair took a U-turn from early-day losses and drew some fresh bids around well above 0.6900 level mainly due to the risk-on market sentiment triggered after the uncertainty between the US-China over trade deal decreased which eventually underpinned the perceived risker Australian dollar and contributed to the currency pair gains. On the other hand, the gains in the currency pair were further bolstered by the broad-based US dollar selling bias in the wake of risk-on market sentiment. At the press time, the AUD/USD currency pair is currently trading at 0.6928 and consolidating in the range between 0.6858 and 0.6938.

It is worth recalling that the currency pair was dropped by over 60 pips in the earlier session and hit session’s low near 0.6860 mainly after White House advisor announced the end of US-China trade deal which initially triggered the risk-off market sentiment and pushed the currency pair lower.

Later, the Navarro explained properly that his comments were taken wrongly by the market and the phase-one agreement was on track. At the same time, the US President Donald Trump also tweeted that the agreement was “fully intact” which eventually turned out to be one of the key factors that kept a lid on any additional downbeat sentiment in the market and exerted some positive impact on the AUD/USD currency pair.

At the USD front, the broad-based US dollar failed to maintain its early day bullish moves and edged lower at least for now, mainly due to the fresh risk-on wave in the market sentiment triggered by the multiple reasons which gave a boost to the risk market and contributed to the greenback’s decline. However, the declines in the US dollar kept the currency higher. From a technical perspective, the currency AUD/USD pair now broke the hurdle above the 0.6900 round-figure marks and seems poised to build on the overnight strong recovery move from the 0.6800 neighborhood.


Looking forward, the market traders will keep their eyes on the flash version of the US Manufacturing and Services PMI for June. Let me remind, this data will be followed by the release of New Home Sales data and the Richmond Manufacturing Index, which will leave an impact on the USD price dynamics and produce some short-term trading opportunities around the AUD/USD pair.

The AUD/USD is on a bullish run, heading toward 0.6978 level. The MACD and RSI both are exhibiting bullish crossover, and these are expected to lead the Aussie to a higher level until the level of 0.6975. Bullish trend continuation can lead to AUD/USD further higher until 0.7030 level. For now, here’s a quick trade idea.