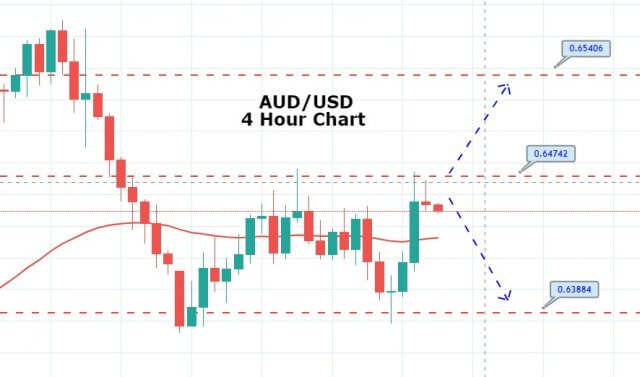 The AUD/USD pair was closed at 0.64041 after placing a high of 0.64526 and a low of 0.63934. Overall the movement of AUD/USD pair remained bearish throughout the day. The Aussie lost its ground on Wednesday on the back of US dollar strength across the board. The US dollar index rose by about 0.4% on Wednesday. The risk-off tone emerged in the market after the grim US employment report and the increasing tensions between US & China.

The US ADP employment report, which was forecasted to be declined by 20.5 Million, came in on Wednesday and showed that jobless people were count as 20.236 Million in the private sector only. This was caused by the impact of coronavirus over the economy due to the lockdown and shutdown of businesses.

Meanwhile, the US President Trump’s threat to China for imposing tariffs and canceling the phase-one trade deal has been favoring the US dollar against riskier assets like Aussie. The risk-off market tone weighed heavily to the pair AUD/USD on Wednesday.

On the other hand, the Retail Sales data from Australia for the month of March showed that the retail sales were recorded as 8.5% against the 8.2% forecasted, and this helped Aussie to pick some ground against the US dollar. Hence, Aussie abled to minimize Wednesday’s losses on the back of better than expected Retail Sales data.

Threats to China would affect Aussie more than any other country because of Australia’s trading relationship with China. That is why this pair was mostly affected even after better Retail Sales data from Australia.


On Thursday, the Trade Balance from Australia and the Unemployment claims from the United States would impact heavily on AUD/USD pair.

Technically, the AUD/USD prices have closed a Doji candle right below 0.6475 trading level, which can drive some selling in the market. A bullish breakout of 0.6475 level can trigger buying until the next resistance level of 0.6540. While the closing of candles below 0.6475 can keep sellers dominant until 0.615 and 0.6385 level today. Good luck!