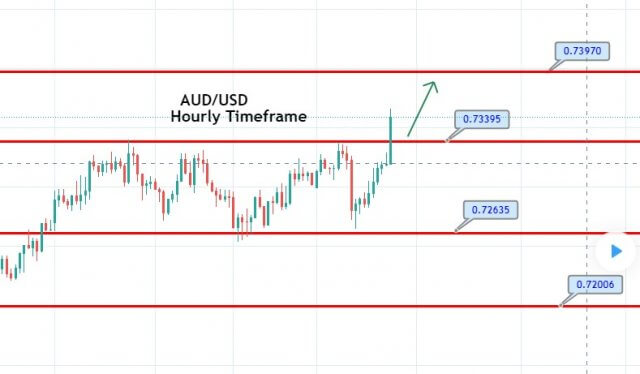 The AUD/USD pair was closed at 0.72859 after placing a high of 0.73371 and a low of 0.72651. On Monday, AUD/USD pair rose and reached a near 0.73380 level amid the risk-on market sentiment; however, the gains started to decline and eventually ended up losing due to increased demand for the US dollar.

The market’s risk sentiment was improved after AstraZeneca; the British pharmaceutical said that its vaccine was 90% effective in preventing the coronavirus with the second dosage. The risk perceived Australian dollar gained traction with the increased risk sentiment and supported the AUD/USD pair’s gains on Monday. However, the AUD/USD pair’s upward momentum started to reverse its direction after the US macroeconomic data released. At 15:00 GMT, Flash Manufacturing PMI from Australia in November came in as 56.1 in comparison to the previous 54.2. Flash Services PMI from Australia came in as 54.9 against the previous 53.7. At 19:45 GMT, the Flash Manufacturing PMI from the US in November surged to 56.7 against the estimated 52.5 and supported the US dollar that weighed on AUD/USD pair. The Flash Services PMI rose to 57.7 against the expected 55.8 and kept the US dollar and added pressure on AUD/USD pair.

Another factor involved in the AUD/USD pair’s downward momentum on Monday was the latest punitive measures imposed by the US over China. The US Trump Administration has banned US investment in 89 Chinese companies and reportedly sent a navy admiral to Taiwan.

Many reports suggest plans by Trump’s administration for a series of confrontations with China before Biden’s inauguration on 20th January. These concerns also kept the risk perceived Australian dollar under pressure and added further in AUD/USD pair losses.

The general and long term view of the market is bullish. We were approaching a resistance level at 0.73400, which has now been violated and the AUD/USD pair has the potential to go after the 0.7397 level. We have already captured this trade and enchased 30+ pips in a trade. For now, we will be looking for a retracement until the 0.7395-90 area to take another buying position in AUD/USD as bullish bias seems dominant today. Good luck!