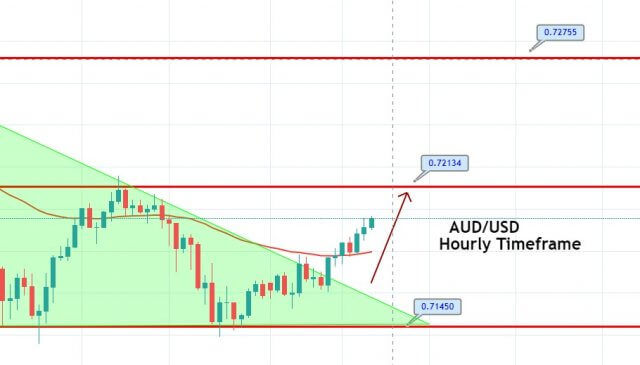 Today in the early European trading session, the AUD/USD currency pair stopped its Asian session losing streak and took further bids at the high around closer to 0.7200 marks mainly due to the upticks in the equity market, supported by the latest optimism over treatment for the highly infectious coronavirus. This, in turn, underpinned the perceived risk currency Australian dollar and contributed to the currency pair gains.

On the contrary, the on-going conflict between the US-China and virus woes in Europe became the key factor that capped further upside for the currency pair. The AUD/USD is currently trading at 0.7185 and consolidating in the range between 0.7152 – 0.7187.

The global market risk sentiment remained well supported by optimism over a possible coronavirus vaccine. These vaccines’ hopes were fueled after the U.S. Food & Drug Administration (FDA) approved the use of blood plasma from recovered patients as a treatment option. The sentiment around the market was also boosted after the reports that the U.S. is considering by-passing normal U.S. regulatory standards to fast-track an experimental coronavirus vaccine from Britain.

Apart from this, the market trading sentiment is rather unaffected by the renewed uncertainties over the much-awaited fiscal package, which has fueled worries over the U.S. economic recovery. It is worth reporting that the U.S. Congress previously showed readiness for reaching an agreement over the latest stimulus measures, but afterward, he took a U-turn from his positive statement.

At the US-China front, the tussle between the world’s two biggest economies, US-China further intensified following U.S. President Trump raised the possibility of decoupling the U.S. economy from China, a major purchaser of the U.S. goods. These gloomy headlines are playing a negative role in capping the further upside in the currency pair.

At the USD front, the broad-based U.S. dollar remained depressed on the day in the wake of the uncertainties over the next round of the U.S. fiscal stimulus measures. As well as, the weaker tone surrounding the U.S. Treasury bond yields in the wake of upbeat market sentiment further pressured the U.S. dollar and contributed to the pair’s gains. Whereas, the U.S. Dollar Index that tracks the USD against a bucket of other currencies was down, inching down to 93.102.

Looking forward, the market traders will focus on the upcoming speech of U.S. Federal Reserve Chairman Jerome Powell at the Jackson Hole symposium on Thursday. As well as, the USD moves and coronavirus headlines will also closely followed ahead as they could play a key role.


The AUD/USD is taking a bullish turn at 0.7190 mark, passing over 50 EMA resistance mark of 0.7180. On the upper side, the AUD/USD may surge unto 0.7216 mark. The 50 EMA is presently serving as s support, though the mystery is whether to go for buy or sell? We are going long on Aussie, and here’s a trading signal.