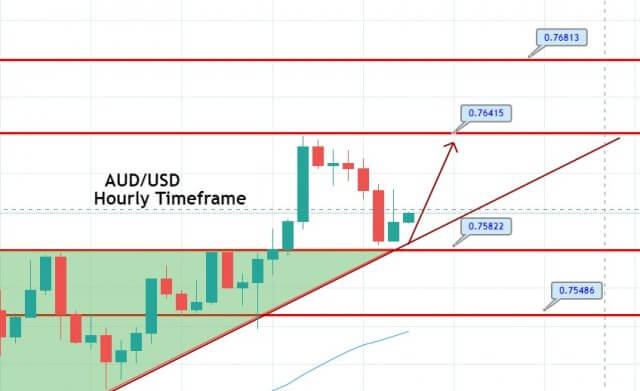 The AUD/USD closed at 0.76263 after placing a high of 0.76393 and a low of 0.75668. The AUD/USD rose above the 0.76300 level on Thursday to its highest level since June 2018 amid the broad-based weakness of the US dollar and the rising risk sentiment in the market. The risk-sensitive Aussie benefited from the market’s broadly positive risk appetite that raised the Wall streets’ main indexes added in the gains of AUD/USD pair. The S&P 500 and Nasdaq Composite indices hit an all-time high on Thursday and added in the risk sentiment that gave strength to risk perceived Aussie.

Furthermore, the UK and EU prospects reaching a deal before the end of the year as the EU parliament had given the deadline to get an agreement before 20th December also increased and supported the risk perceived Aussie and added in the upward trend of the AUD/USD pair.

The greenback was weak across the board on Thursday as the US Dollar Index (DXY) fell to its lowest since April 2018, below 90 levels to 89.7. The US dollar weakness was due to many factors, including the rising prospects of reaching a deal between Democrats and Republicans over the second round of the US stimulus bill.

The US dollar was also weak because of the rising number of coronavirus cases in many US states despite the vaccine rollout and lockdown. The reports suggested that the total number of coronavirus cases in the US reached 17M and made the country the hardest-hit country in the world by the pandemic. Furthermore, the Federal Reserve’s latest decision to extend its bond purchases program also added pressure on the greenback that ultimately affected the movement of the AUD/USD pair. All these factors combined and weighed on the US dollar on Thursday that added strength in the currency pair AUD/USD pair.

On the technical front, the AUD/USD is trading slightly bullish at 0.7590, facing immediate resistance at the 0.7640 level. Bullish crossover of this level can extend upward trend until the next target level of 0.7680. However, failure to break above the 0.7680 level can extend selling moves until the support area of the 0.7580 AND 0.7545 level. The 50 periods EMA is suggesting a buying trend, but the MACD is suggesting a buying scenario. Thus, we should look for buying trades over the 0.7580 level. Good luck!