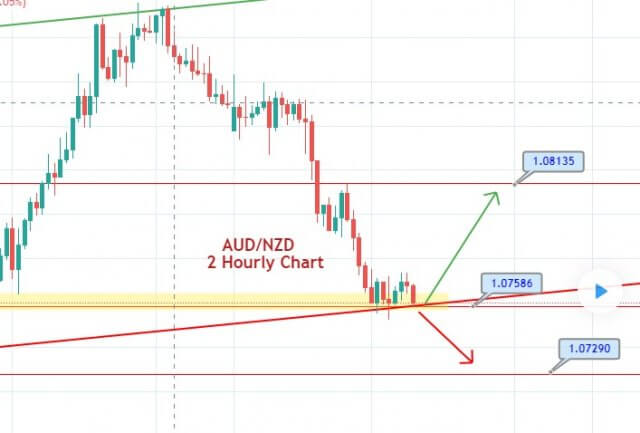 The AUD/NZD currency pair failed to extend its early-day winning streak and remain flat around 1.0753/70 region, mainly due to the risk-off market sentiment, which eventually undermined the perceived risk currency Australian dollar and contributed to the currency pair declines. However, the market trading sentiment was being pressured by the intensification of the Sino-American tussle, and the uncertainty over the American stimulus package also weighed on the market trading tone.

Meanwhile, the downbeat reports that Johnson & Johnson paused the coronavirus vaccine trails also played its major role in weakening the market risk mood, which adds further burden around the currency pair. Across the pond, the bearish tone around the currency pair could also be associated with the fresh reports suggesting that Australia becomes the largest customer of New Zealand, which eventually underpinned the NZD currency and contributes to the currency pair losses.

In the meantime, the election expectations in New Zealand also favored the NZD bulls as the current Prime Minister (PM) Jacinda Ardern is a market favorite due to her ability to safeguard, which keeps the NZD currency supportive and dragged the currency pair down. At the moment, the AUD/NZD currency pair is currently trading at 1.0771 and consolidating in the range between 1.0753 – 1.0775.

However, the market risk tone has been sluggish since the day started due to various factors. Be it the U.S. lawmakers’ failure to offer any positive announcement on the coronavirus (COVID-19) relief package or the fresh escalation in the Sino-American tussle, not to forget the delay in the COVID-19 vaccine, these all factors have been weighing on the market risk tone. This, in turn, underpinned the perceived risk currency Australian dollar and contributed to the currency pair declines.

As per the latest report, the Eli Lilly and Co. (NYSE: LLY) paused the government-led clinical trial of its COVID-19 antibody treatment a day after Johnson & Johnson (NYSE: JNJ) delayed clinical trials for its COVID-19 vaccine due to an unexplained illness in a participant. This, in turn, increased the safe-haven demand in the market. Thus, the downbeat market mood exerted some additional pressure on the perceived riskier Australian dollar.

Moreover, the market trading sentiment was further bolstered by the rising coronavirus cases in the U.S. and Europe, fueling worries about global economic recovery. According to the coronavirus (COVID-19) data from Johns Hopkins University data., the number of global cases crossed 38 million as of October 14. Whereas the U.S. still not showing any signs of decreasing infection rates, which raised concerns over the economic recovery. At the Europe front, the daily new confirmed cases grew 5,132 to 334,585 in Europe while the death toll also rose by 40, taking the total to 9,677. There were additional 4,122 cases the previous day with 13 death, as per the latest data.

Besides, the currency pair’s losses were further bolstered by the prevalent concerns about a row with China over coal imports, which also weighed on the market sentiment and undermined the Australian currency. The 2-major factors have been dominating the AUD currency. Firstly, China appears to have verbally enacted a ban on Australian coal imports. At the same time, China’s Balance of Trade dropped to $37.0 billion in September, which undermined the AUD currency and dragged the currency pair down.

Looking forward, the traders will keep their eyes on the release of the US PPI figures for September. Meanwhile, FOMC members and the RBNZ policymaker’s scheduled speeches will key to watch for some meaningful trading direction. Apart from this, the ongoing drama surrounding the US-China relations and updates about the U.S. stimulus package will not lose their importance.