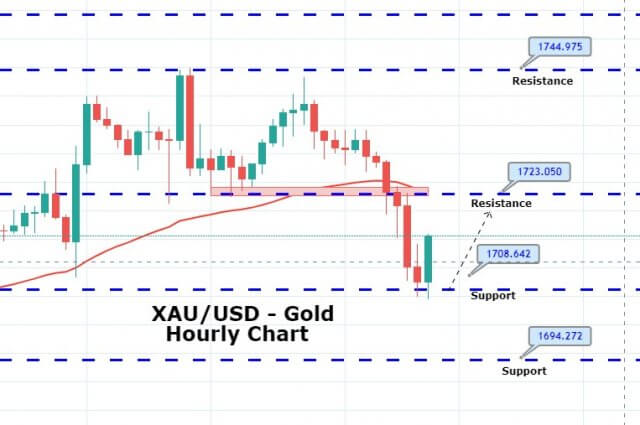 The safe-haven-metal prices rose slightly to $1,731 before falling to intraday low pf at 1,708 level due to the risk-off market sentiment triggered by the second wave of coronavirus (COVID-19) outbreak which tends to underpin the safe-haven assets like gold. On the other hand, the traders did not give any significant attention to the upbeat comments from the Dallas Federal Reserve President Robert Kaplan.

At the coronavirus front, the Tokyo reported numbers of COVID-19 cases rose by 47, the highest level since May 05. In the meantime, the Dragon Nation has closed markets again after the increase in the virus cases around the Xinfadi food market in the Southern Fengtai district. Almost 20 above U.S. states reported a rise in new cases, which eventually exerted downside pressure on the risk sentiment.

Moreover, the rise in cases would weaken the extreme optimism about a potential V-shaped recovery. The reason for the heavy risk sentiment could also be attributed to the intensifying fears of protest in America. Whereas, the Federal Reserve chairman Jerome Powell broadly expected to repeat the depressing picture of the U.S. economy in his semi-annual policy report to Congress later this week which initially weighed on the risk sentiment.

The futures tied to the S&P 500 reported losses by a 1.3% decline on the day during the early trading session. In the meantime, major Asian indices like Japan’s Nikkei and South Korea’s Kospi also flashed red while the Stocks felt the pull of gravity mainly due to fears of the second wave of the coronavirus outbreak.

The reason behind the yellow-metal gains could also be attributed to the broad-based U.S. dollar weakness. Despite the risk-off market sentiment, the greenback reported losses on Monday morning in the Asian trading session while the U.S. Dollar Index that tracks the greenback against a basket of other currencies slipped 0.22% to 97.11, which is supported gold previously. For now, the market participants will keep their eyes on the Fed and the virus updates for fresh impulse. Moreover, China’s May month data dump, comprising Industrial Production and Retail Sales, will also be key to watch.


Technically, the precious metal gold prices fell to 1,707 level, entering into the oversold zone. That’s where we decided to enter a buy position in gold. Closing of the recent candle with long wicks on both sides is suggesting indecision among traders and is suggesting odds of bullish correction/retracement in gold. On the higher side, gold has the potential to go after 1,723 level.