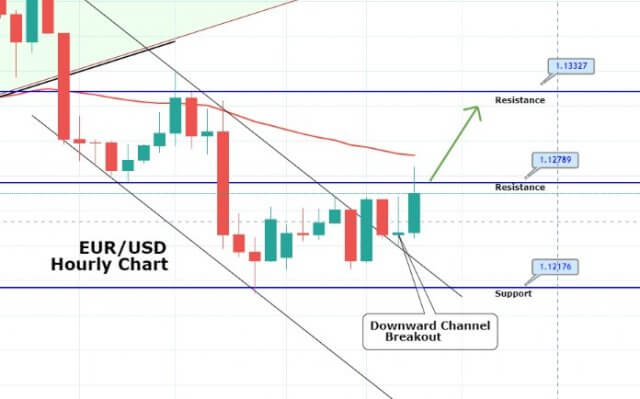 During the European session, the EUR/USD pair flashed red and dropped to 1.1230 before bouncing off towards the 1.1270 level. The broad-based U.S. dollar just started to erase its early-day losses and gained some bullish traction due to the risk-off market sentiment, which also exerted some downside pressure on the currency pair.

The Tokyo reported numbers of COVID-19 cases rose by 47, the highest level since May 05. In the meantime, the Dragon Nation has closed markets once again due to the increase in the virus cases around the Xinfadi food market in the Southern Fengtai district. Almost 20 above U.S. states reported a rise in new cases, which eventually exerted downside pressure on the risk sentiment.

The reason for the risk-off market sentiment could also be attributed to the possibility of renewed lockdowns to curb the spread, which eventually undermined the prospects for a sharp V-shaped economic recovery. The risk-off market sentiment finally pushed the U.S. dollar higher, at least for now, and became a key factor that kept the lid on any gains in EUR/USD pair.

The trader did not give any significant attention to the report that the Eurozone’s economic powerhouse expected to see its contribution to the European Union’s (E.U.) budget rise by 42%, or EUR13 billion (11.7 billion pounds) annually, over the coming years as per Reuters.

It’s worth recalling that currency pair dropped by 0.64% on Thursday, mainly after the Fed-induced reality check undermined hopes of a V-shaped economic recovery and weighed heavily on the global stock markets, which means it’s probably a time traders may start doing profit-taking in the pair.


Technically, the EUR/USD pair is trading in the oversold zone, which is one of the strongest reasons investors have to trigger profit-taking in their sell trades and enter a buy trade. The EUR/USD pair has violated the downward channel at 1.1270 level and, at the same time, forming a bullish engulfing candle on the 4-hour timeframe. The leading indicator MACD is also showing a bullish crossover, which suggests more buying in the pair. Let’s consider taking a buy trade as per the below trade plan.