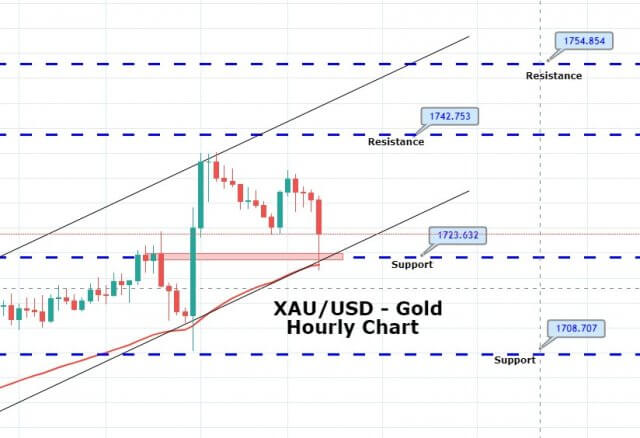 The safe-haven-metal prices failed to maintain its previous day gains and dropped to $1,730 from $1,740, the highest since June 02 while representing 0.35% losses on the day as the broad-based U.S. dollar recently took a U-turn from the multi-day low backed by the fresh US-China tussle and contributed to the yellow-metal losses as they both have an inverse relationship. On the other hand, the risk-off market sentiment triggered by fresh conflict between US-China turned out to be one of the key factors that kept a lid on any additional losses in the gold.

At the USD front, the broad-based U.S. dollar drew bids on the day as investors lose their confidence about sharp economy recovery after details came from the U.S. Federal Reserve’s policy meeting the day before. The U.S. economy will collapse 6.5% this year, and the unemployment rate will be 9.3% by the end of the year, as per the Fed quarterly projections. The reason for the upticks in the U.S. dollar could also be attributed to the fresh on-ging tussle between the United States and China, which eventually fueled the risk-off market sentiment.

The U.S. dollar was dropped to the lowest since March 10 instantly after the U.S. central bank hit a dovish tone the previous day. Wherein the U.S. Federal Open Market Committee (FOMC) decided to keep the benchmark rate unchanged. In the meantime, U.S. President Donald Trump’s cheer the Fed’s action.

Apart from this, the risk-off market sentiment was further bolstered by the fears of the coronavirus (COVID-19) second wave. The reason behind the risk-off market sentiment could also be associated with the report of the OECD latest Economic Projections. Wherein the report indicated the downside fears for the global economy due to the coronavirus (COVID-19).

Looking forward, the US-China tussle will gain market attention due to the light calendar and become worth watching for a near-term direction. At the data front, the U.S. Weekly Jobless Claims and Producer Price Index for May will be key to wait for new moves in the pair.


The yellow metal gold was on a bullish break due to the dovish FOMC strategy, where FED stated interest rates are expected to linger on hold until 2022. While they are expecting deflation in GDP, the weaker dollar is encouraging buying in gold; consequently, we may see gold prices flying higher until 1,745 in the coming days. Exactly before this, the overbought gold may sink a bit unto 1,726 range to achieve retracement. So, the immediate support for gold exists at 1,726 and 1,718 levels, while resistance visits at 1,738 and 1,745. So it was a good idea to close at in profit around 1,736 level as the market reversed right after that.