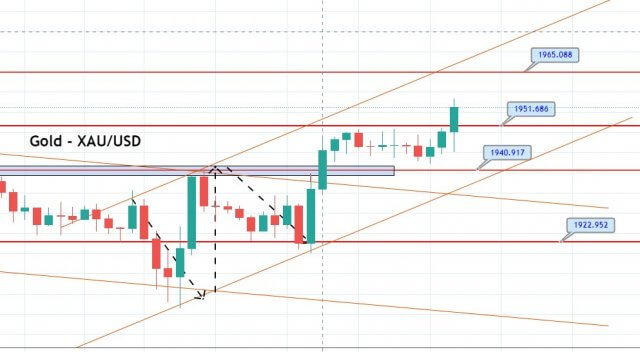 The yellow metal prices extended its bullish overnight rally and still taking bid around above the 1,950 level. Let me remind you that the fall in U.S. tech stocks initially boosted the safe-haven metal’s rise during the previous session, pulling it up from a low of $1,927.20 to an overnight high of $1,959.35.

The reason for the on-going bullish tone around the gold prices could also be associated with the broadly weaker U.S. dollar. However, the weaker tone around the U.S. dollar was mainly driven by the trader’s cautious sentiment before of the European Central Bank (ECB) meeting. Therefore, the market trading sentiment was being supported by the news that TikTok parent’s request to not push for the entire sale to the U.S.

Furthermore, the U.S. State Department’s keeps doors open for Chinese students who don’t support their leading national party, after over 1,000 visa rejection. This also exerted a positive impact on the market trading sentiment and became the key events that kept the pressure on any additional gains in the yellow metal. The yellow metal prices are currently trading at 1,947.58 and consolidating in the range between 1,943.76 – 1,950.78. As we know, the market sentiment remains mostly positive, while the lack of catalysts and the pre-ECB attentiveness could also be considered as reasons for the recent gold pullback.

Despite the on-going Sino-American tussle and worries concerning the U.S. stimulus package, the market trading sentiment extended its previous session positive tone. It remained supportive of the combination of factors. As in result, the S&P 500 Futures print 0.30% gains to 3,404 by the press time. Hence, the reason for the risk-on market trading sentiment could be attributed to the positive headlines concerning TikTok. It should be noted that the TikTok’s parent Bytedance is in talks with the U.S. to avoid the full sale of the company. This eventually trimmed the safe-haven demand in the market. Also supporting the market tone could be the news that the U.S. showing willingness to keep doors open for Chinese students, those who don’t support their leading national party, after over 1,000 visa rejection. Apart from this, the recent news that Tokyo is considering easing virus-led lockdown also favors market trading sentiment.

At the USD front, the broad-based U.S. dollar failed to maintain its previous day gaining streak and dopped on the day mainly due to the risk-on market sentiment. Moreover, the U.S. dollar losses could also be associated with cautious sentiment ahead of the European Central Bank (ECB) meeting taking place later in the day. However, the U.S. dollar losses kept the gold prices higher as the price of gold is negatively related to the price of the U.S. dollar. While , the U.S. Dollar Index that measures the greenback against a bucket of other currencies dropped by 0.10% to 93.165 by 11:54 PM ET (4:54 AM GMT).

Across the Pond, the tensions between China and the U.S., and India keep gaining market attention and challenged the market risk-on tone. The tensions between Sino-US were further fueled after President US Trump warned to “stand tough against the Dragon Nation” if he is re-elected. Elsewhere, the tussle between China and India still on in the background, while uncertainty over the Brexit deal keeps challenging the market risk-on sentiment, which might help further the safe-haven yellow metal.

Looking ahead, the market traders will keep their eyes on updates surrounding the Sino-US tussle, as well as Brexit related headline. Simultaneously, the market traders seem cautious ahead of the ECB meeting as they await a strong positive message from the ECB, which is less likely, to keep the recent rise.


The yellow metal gold has disrupted the resistance mark of 1,935 level, and presently it’s meeting resistance at the 1,949 mark. A bullish violation of the 1,949 mark may trigger buying until the 1,958 level on the upper side. Whereas, the support extends to operate at 1,935 and 1,922. The U.S. Unemployment Claims and PPI data will be the main market mover for gold.