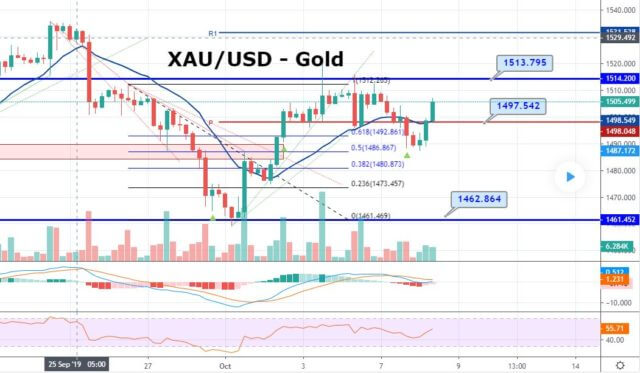 Today in the early European session, the safe-haven metal prices slipped due to less expectation of the rate cut by the Federal Reserve. Earlier today, the U.S. Gold was down by 0.6% at $1,495.85 as Fed Rate Monitor Tool showed a high chance for a quarter-point rate cut when the Federal Reserve meets Oct. 28-29 at 69.5 percent, versus 72.7 percent on Monday and 78 percent on Friday. The lowered chances of easing by the Federal Reserve continued to hurt gold in post-settlement trade, sending it under the critical $1500 level.

As of writing this, the precious metal gold prices are surging in the wake of boosted safe-haven appeal amid the uncertainty. China-U.S. trade talks are expected to affect gold’s movement late this week when high-level negotiations between the two sides resume this Thursday.

Trade discussions are expected to manage the gold prices movement during this week when both high-level officials will do talks between the two sides’ resumes on Thursday.

At the Hong Kong front, the government of Hong Kong invoked a colonial-era emergency law to stop protesters wearing face masks. Due to this decision, further made the worst environment, which damage China’s banking facilities and retail outlets in the entire city.

On the technical front, gold has for Doji pattern at 1,497 area, which has to extend support to gold since the morning while the RSI and MACD are shifting in the buy zone.

Three bullish candles on the 4-hour chart are signaling chances of a further bullish trend. Today, gold may find an immediate resistance level at 1,513 and support at 1,487 level. Consider staying bearish below the triple top level of 1,513 zones.