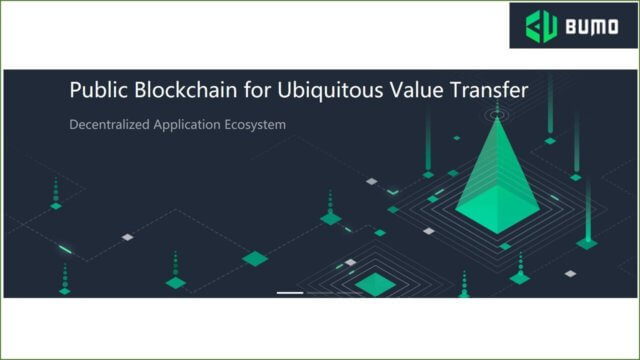 Before we say a single thing about Bumo blockchain, we need to talk about blockchain. Blockchain is a publicly distributed ledger that records transactions between parties permanently, transparently, and in a peer-to-peer manner.

The concept of blockchain existed in the developer community for years. Still, it only came to life in 2008 when a person/people under the pseudonym Satoshi Nakamoto created a blockchain to serve as the underlying technology under the world’s first cryptocurrency – Bitcoin.

Since then, numerous cryptocurrencies have been created by developers all over the world – either running on their own blockchains or other cryptocurrencies’ blockchains.  The technology has also broken out of the cryptocurrency application and has been adopted in other industries – from finance to healthcare to supply chain and so on. These applications represent the private, enterprise side, of blockchain.

Bumo is a next-generation enterprise-grade public blockchain that hopes to host what it calls a ‘ubiquitous’ value transfer, smart contracts, and decentralized applications platform. The Bumo project is still in beta, i.e., still in development.

Let’s look at some of Bumo’s unique selling points right off the park:

In this guide, we’ll look at these features in greater detail and see what Bumo hopes to do differently for the blockchain ecosystem. To do that, we first need to talk about the inherent problems with blockchain right now.

Problems with the Blockchain

The first and second-generation blockchain’s scalability issue refers to their inability to handle high-volume transactions within a short period of time – hence they can’t be used to serve millions of people all over the world.

The other reason is the 1MB sized blocks on the Bitcoin blockchain, which severely limits how much data any one block can hold. This means your transactions have to wait in a queue for roughly 10 minutes. On the Ethereum blockchain, there are no block size limits, but transactions may take an average of 15 seconds before verification.

The lack of interoperability also means mainstream adoption of the blockchain is impossible. This is because, for blockchain technology to be integrated into the mainstream, it needs to be able to interact with existing systems.

BUMO is a next-generation blockchain that’s going to be catering to businesses. It comprises of two-layer chains that will help streamline transactions on the blockchain. The Bumo system will also be interoperable with both heterogeneous and homogeneous blockchain.

Bumo is a vision of four core people: Steven Li, Steven Guo, John Zhao, and Yuliang Zheng. This team has between them a wealth of experience in Physics, blockchain, cryptography, and hashing technology.

Let’s dive deeper into the core features the Bumo blockchain that makes it stand out:

A multisig (multi-signature) is an account owned and controlled by more than one party. The Bumo blockchain uses something known as ‘account weightage’ to give more power of access to some signature holders over others. For example, if three people own a business and they have an account on the Bumo blockchain, the CEO’s approval, for instance, will count more than the other two’s.  This is an approach that the Bumo team hopes will appeal to big companies.

The Merkle Patricia Trie is a tool that combines the technologies of Merkle Tree and Patricia (Practical Algorithm to Retrieve Information Coded in Alphanumeric) Tree. This combination makes it easier to find particular transactions by reducing the time that would be taken to ascertain if that transaction belongs to a particular block or not.

Depending on the characteristics of the data, the Bumo blockchain will differentiate data into off-chain and on-chain data, providing a streamlined system for handling heavy and complex data. This differentiation will help reduce the burden on the blockchain and save on hardware costs because the node network will experience less strain.

Interoperability Feature of the Bumo Blockchain

Cross chains are akin to the routers in a traditional network system. They route data from various blockchains towards the target blockchain.

BUMO hopes to be the best destination for smart contracts. The platform will feature these properties which are specifically geared to help it achieve this purpose:

i) Turing complete, or ‘computationally universal,’ which means a contract can solve any problem with the right tools

Also, the Bumo platform will provide a unique space for app developers, thanks to the following features:

☑️The ability to handle up to 10,000 transactions per second

☑️Reduce the costs of operation, maintenance, and exchange of data in the blockchain

The Bumo blockchain is poised to reinvent several aspects of blockchain and stir the crypto space for the better. If Bumo succeeds, it’s very likely the blockchain world will bid goodbye problems like scalability issues, lack of interoperability, and the need to be well-versed in programing language so as to create applications. Will the Bumo team deliver, or is it another overhyped blockchain project? As with many things in blockchain tech, only time will tell.