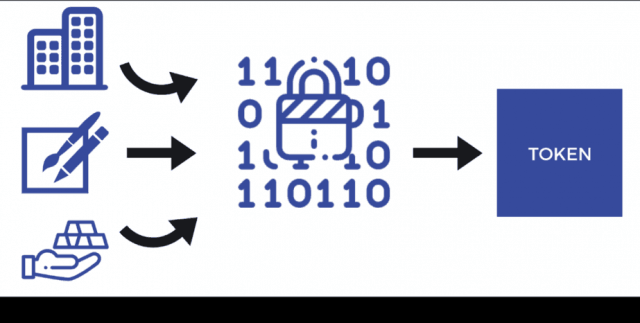 The real estate market is one of the oldest markets characterized by slow, paper-dependent processes causing significant delays in the change of property ownership. The transactional friction can be blamed on the complex architecture of the market that involves multiple stakeholders, large amounts of money, and numerous regulations that are dependent on jurisdiction. On top of it all, each transaction has to go through myriad middlemen, from the listing agent to banks and everything in between – resulting in unprecedented transaction costs.

Although the structure of the real estate market alone isn’t much of a big deal as every stakeholder has a vital role to play, the resultant dysfunctions it creates needs to be solved as the market keeps on growing. As blockchain technology finds use in almost every industry, the real estate market can also make use of this technology to solve the derailing dysfunctions. This can be done through asset tokenization.

What is real estate tokenization?

Tokenization is the conversion of a physical asset into its digital form, which in turn derives/acquires its value from the underlying asset. Once the assets are tokenized, they can easily be divided into smaller pieces and made accessible to a wider pool of investors as a way of raising capital. As such, depending on their investment amount, an investor gets a share of the larger token to act as a representation of ownership. Also, investors can trade their token shares freely on a secondary market based on the current value of the property.

The issuing, management, and exchange of these tokens is done on a blockchain network, thereby promoting immutable documentation processes, transparency, and traceability. Most importantly, the token investors will have undisputed control over the asset since they own the private keys of the tokens – much in the same way virtual currencies allow users to take control over their finances.

Like in most industries where blockchain has found use, the real estate market is also set to benefit immensely from this technology once realtors warm up to the idea of tokenizing property. Let’s explore some of these benefits:

Despite being a safe investment, the real estate market is highly illiquid majorly due to the large amounts of money transacted between the buyer and sellers, as well as the third-parties such as lawyers and banks involved in the transaction. Moreover, due to the large initial investment amount required, potential property buyers are locked out from investing in real estate.

Property tokenization injects liquidity into the real estate market by allowing assets to be divided into smaller units representing fractional ownership. For instance, a condo going for $1 million can be divided into tokens worth $200 or less, lowering the minimum investment for investors. The tokens can be traded at secondary markets at any time of the day, allowing investors to readily change their assets to cash when they need to. Higher liquidity can also positively influence the value of the asset by removing intermediaries such as the listing agent, bringing an asset’s price closer to its true value.

The newfound liquidity has the potential to inspire monetization of other aspects of real estate, such as leasing, spurring further development of the entire market.

To facilitate the buying and selling of tokenized property, smart contracts can be introduced in the transactions for a seamless and efficient exchange of property ownership. This means less paperwork and almost no intermediaries, which in turn lowers the additional transactional costs. This also speeds up settlements as the tokens contain built-in terms of the contract.

Smart contracts can also be used to ensure compliance with the laws is maintained. This is especially true for the Know Your Customer (KYC) and anti-money laundering (AML) policies that must be observed in every transaction. Smart contracts will reduce the paperwork involved in these procedures, saving realtors time and money.

Property tokens transacted on the blockchain networks are cryptographically secured on the ledger system. Access to these tokens is only limited to the investors who are entrusted with the private keys. This goes a long way into ensuring that property is held only by the rightful owner, minimizing fraud.

In a similar vein, the distributed ledger system maintains records of all transactions in an immutable and transparent manner, further eliminating the possibility of fraudulent activities. As such, before buying tokens, an investor can review all the past transactions to ascertain the true owner of the property token, whether or not the asking price is realistic or not. This way, there won’t be instances of double-selling nor room for under/overpaying.

Also, smart contracts further enhance the transparency and traceability of token transactions. In addition to eliminating fraud, the increased transparency brought by smart contracts opens an opportunity for overseas investors to invest in the property market. This translates to more money being channeled into the market, boosting its liquidity.

In addition to improving liquidity, fractional ownership of property introduces a new investment vehicle through which risk-averse investors can earn passive income. Similar to equities in a security market, tokens can represent multiple owners of a rental property who earn a portion of the rent as passive income. The smart investors can diversify their token portfolio to include land and commercial properties, reducing the overall risk while maximizing returns.

In theory, tokenization of property offers a myriad of benefits to real estate investors while scaling up the entire market with respect to exponential growth. On the downside, however, tokenization won’t be as easy as many would wish – mainly due to the regulatory hurdles facing blockchain. For starters, many governments across the globe don’t have clear laws governing the issuance of blockchain tokens. Even for those that have already set up laws regulating digital assets view tokens as a type of security or a traditional investment vehicle. This brings in the complex aspect of digital asset taxation, which may scare away investors.

The issuers of these tokens will also have to invest a substantial amount of time and money in maintaining regulatory compliance with the stringent policies governing digital assets. Even in jurisdictions where the regulations are lenient, marketing property tokens in another jurisdiction where there are different policies will be an uphill task requiring close scrutiny.

The real estate market has a history of being slow to adapt to emerging technologies. But if the market is determined to do away with long paper processes and slow turnaround time, it has to invest in blockchain technology for the tokenization of property. This will not only solve its long-time problems but also give the market a driver’s seat in the face of modernity and dynamic technological advances.