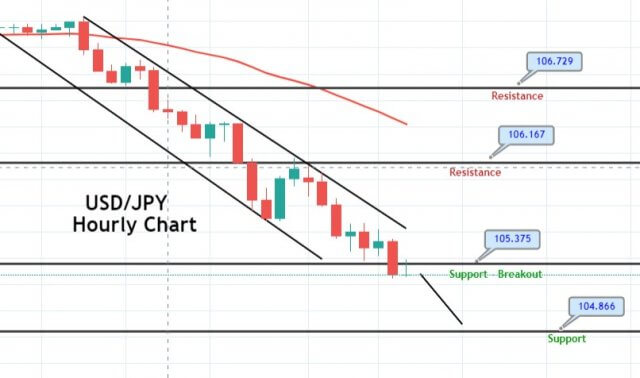 The USD/JPY currency pair failed to stop its previous week’s losing streak and dropped further below mid-105.00 marks mainly due to the broad-based U.S. dollar weakness, triggered by the worries that the resurgence in cornonavirus cases in the United States could undermine the recovery in the world’s biggest economy, which eventually pushed the U.S. Treasury bond yields down and contributed to the currency pair losses.

On the other hand, the concerns about worsening US-China relations underpinned the safe-haven Japanese yen, which exerted an additional burden on the currency pair. Currently, the USD/JPY currency pair is currently trading at 105.41 and consolidating in the range between 105.39 – 106.06.

The tensions between the world’s two largest economies escalated further last week after the Dragon Nation countered for being expelled from the Chinese consulate in Houston and ordered the U.S. to close its office in Chengdu in return. The U.S. Secretary of State Mike Pompeo called for “a new alliance of democracies” to oppose China’s “new tyranny”. However, these gloomy worries overshadowed the latest optimism over a potential vaccine for the highly contagious coronavirus disease and weighed on the risk sentiment. This, in turn, benefited the Japanese yen perceived safe-haven status against its American counterpart.

Apart from this, the second wave of coronavirus outbreak in the U.S. dampened prospects for a swift turnaround for the U.S. economy, witnessed by the declines in the U.S. Treasury bond yields. The United States crossed 4 million officially recorded Covid-19 cases and covered a significant part of that recorded in just the last 15 days. Almost 1,000 above people died each day between Tuesday and Friday in the U.S. whereas, there were also a near-record 74,000 new cases on Friday. California, with a community of almost 40 million, about twice Florida’s, is now the worst-hit state, nearing 450,000 cases. Globally, the number of coronavirus infections has now crossed 16 million, as per the Johns Hopkins University report.

At the USD front, the broad-based U.S. dollar remained depressed and reported losses on the day due to record rise in the daily count of COVID-19 cases and escalated U.S.-China tensions over the latest disagreement between the two countries. However, the losses in the U.S. dollar kept the currency pair under pressure. Whereas, the U.S. Dollar Index that tracks the greenback against a basket of other currencies slipped 0.47% to 93.933 by 12:15 AM ET (05:15 AM GMT), continuing its slide from Friday.

Across the Pound, the losses in the currency pair could also be associated with BOJ’s optimistic comments on the economy that Japan’s economy may improve in the latter half of this year if coronavirus shows any slowing sign down. However, these comments also played a minor role in stronger Japanese yen.

The market players will keep their eyes on the U.S. economic docket, which will show the announcement of Durable Goods Orders later during the early North American session. In the meantime, investors will also keep their eyes on the broader market risk sentiment, which could play a key role in influencing the currency pair’s intraday momentum.


The USD/JPY is breaking below 105.375 support level, which can lead it’s prices further lower toward 104.866. On the 2 hour timeframe, the USD/JPY is trading within a downward channel, which can extend further selling in the pair. Recently, the USD/JPY has closed a bearish engulfing candle, which is suggesting odds of selling until 104.866 level. Check out a quick trade plan below…