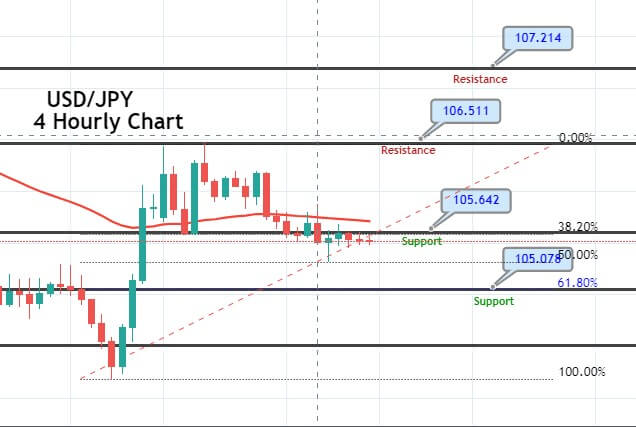 The USD/JPY failed to extend its previous session bullish moves and witnessed some selling moves around 105.55 level mainly due to the broad-based U.S. dollar weakness. The worries triggered that the second wave of COVID-19 cases in the United States could ruin the recovery in the world’s biggest economy. Also weighing factor for the greenback was a failure over the much-awaited stimulus. The risk-on market sentiment (backed by the positive reports about the coronavirus treatment and hopes of the Sino-American trade discussion), undermined the safe-haven Japanese yen, which become the key factor that helped the currency pair to limits its deeper losses. The fresh reports about the further relief employment subsidy by the Japanese government largely ignored by the currency pair traders, at least for now. Currently, the USD/JPY currency pair is currently trading at 105.69 and consolidating in the range between 105.52 – 105.80.

Apart from virus woes, the impasse over the next round of the U.S. fiscal stimulus also exerted downside pressure on the U.S. dollar and contributed to the currency pair losses. The U.S. lawmakers are still considerably apart to agree on the deal, and the discussions became more difficult after unemployment claims benefits expired last week. Considering the uncertain situation, the House Speaker Nancy Pelosi blamed U.S. President Donald Trump for the continuous suspension on the phase 4.0 COVID-19 relief package.

The broad-based U.S. dollar edged lower on the day as the virus woes continuously destroying hopes for a quick economic recovery, witnessed by the yesterday’s downbeat U.S. job data. This, in turn, was seen as major factors that continued weighing on the greenback. However, the losses in the U.S. dollar kept the USD/JPY currency pair under pressure. Whereas, the U.S. Dollar Index that tracks the U.S. dollar against a bucket of other currencies dropped by 0.09% to 93.148 by 10 AM ET (3 AM GMT).

At the US-China front, the rising tensions between the United States and China continued to pick up the pace after the U.S. President Donald Trump banned the TikTok Chinese app in the U.S. while saying if the dragon nation wants to re-active this app in America, then the owner of this app will be American. Despite this on-going tussle, the policymakers from both sides are set for a meeting on August 15 about the trade deal, which supports the market risk sentiment and helped pair to limit its deeper losses by undermining the safe-haven Japanese yen.

However, the upbeat market was further supported by the upbeat prints of U.S. Factory Orders and the stabilization of the virus numbers from the U.S. and Australia. The latest positive updates about the coronavirus also exerted a positive impact on the trading sentiment and became the key factor that kept the lid on any further losses in the currency pair. It is worth reporting that the transfusions of blood plasma rich, with antibodies from recovered COVID-19 patients, received by hospitalized patients decreased their death rate by about 50%.

Across the Pound, the Japanese labor ministry official told that the Japanese government is thinking of extending its coronavirus relief employment subsidy to support companies badly hit by the coronavirus. By the way, this news was largely ignored by the currency pair traders.


The USD/JPY trades with a bullish sentiment around 105.950 level, having completed 61.8% Fibonacci retracement at 106.063. The pair is forming a bearish engulfing candle below 106.406 level, the level that worked as a support for USD/JPY in now it’s working as a resistance. On the higher side, next USD/JPY may find resistance at 106.650, while support stays at 105.250. The MACD and RSI both are suggesting bullish bias in USD/JPY pair today.