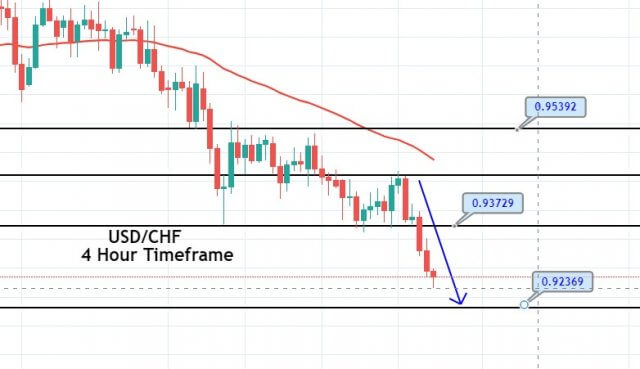 The USD/CHF remains bearish on Thursday as the downside seems solid, especially upon the breakout of 0.9372 support level. On the lower side, the USD/CHF has the potential to go after 0.9236 level. The demand for Swiss Francs has increased in the wake of safe-haven appeal as the CHF is also considered a safe-haven asset.

Tensions between the world’s two largest economies escalated further after the US unexpectedly ordered China to close its consulate office in Houston within 72 hours due to the allegations of interference. In return, China quickly responded and threatened to retaliate with firm countermeasures, which eventually fueled the fears that the on-going conflict could harm the US-China trade deal. Apart from this, US President Donald Trump also decided to use additional measures against the Asian major while imposing a ban on travel to the United States by the 92 million members of China’s ruling Communist Party. This action could invite retaliation against American travel and residency in China. However, the news from Axios also suggested an escalation in the tussle citing the Federal Bureau of Investigation (FBI).

The on-going doubt over the next round of the US fiscal stimulus measures also challenged the risk-on market sentiment. The Republican-majority Senate has been mainly ignoring a $3 trillion relief bill, which was already passed by the Democrat-majority House of Representatives two months ago. The US Treasury Secretary Steve Mnuchin’s initial signal that the US policymakers will be ready to deliver aid package by the end of July got dimmed after the government cited the need for intermediate extension of the unemployment insurance benefits.


Technically, we can capture a selling trade in USD/CHF, especially below 0.9372 level. On the lower side, the USD/CHF can go after 0.9236 level. The 50 periods EMA is supporting bearish bias in USD/CHF pair along with the three black crows pattern, which may lead the USD/CHF pair lower towards 0.9236. Here’s a quick trade plan…