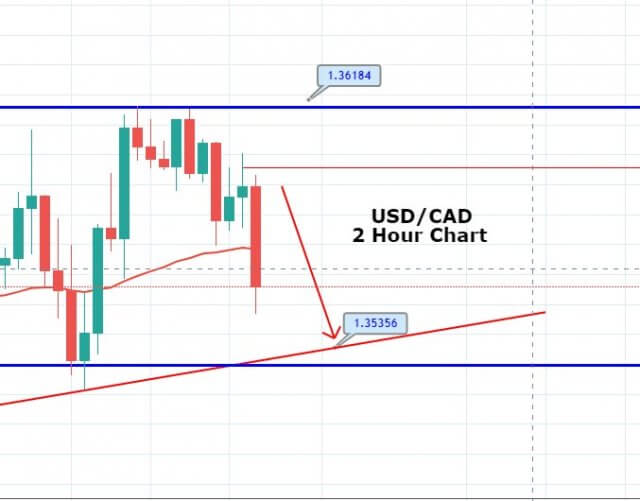 During the early European trading session, the USD/CAD currency pair failed to stop its previous day bearish run-up and dropped to 1.3570 from the 1.3617 level, mainly due to the broad-based U.S. dollar weakness backed by the risk-on market sentiment. As well as, the reason for the pair declined could also be attributed to the upticks in crude oil, which underpinned the commodity-linked currency the loonie and contributed to the pairs declines.

On the other hand, the losses of the currency pair were further bolstered by the positive comments from the Canadian Finance Minister Bill Morneau about (not considering a tax hike), which initially gave additional support to the loonie. Despite the increasing coronavirus cases in China and some U.S. states, the Asian stocks flashed green backed by optimism about the monetary and fiscal support programs from across the globe in the wake of the coronavirus outbreak.

On the contrary, the fresh optimism between the United States and China triggered by China’s decision to increase purchases of U.S. farm goods to respect the Phase One trade deal after the talks in Hawaii overshadowed their other concerns and gave additional support to the risk sentiment.

As a result, the broad-based U.S. dollar reported losses that played a key role in the decline of the currency pair. The latest upbeat U.S. jobless claims also suggested a further economic recovery, which also boosted the risk-on market sentiment and pushed the USD lower. In the meantime, the intensifying coronavirus cases will keep a lid on any further losses in the U.S. dollar.

At the crude oil front, the WTI crude oil prices rose around 3% on the day and hit the 3-month high around the $40.00/barrel mark, mainly due to the reports that Iraq and Kazakhstan have promised to agree with oil cuts. The sign of gradual recovery across the globe was triggered after easing government lockdowns imposed to control the coronavirus, which eventually boosted the oil prices.

However, the oil price gain underpinned demand for the commodity-linked currency – the loonie which kept the currency pair under pressure. The traders will keep their focus on Friday’s Canadian economic docket, which will show the release of monthly retail sales data for a fresh impetus. As well as, the Fed Chair Jerome Powell’s comments at a panel discussion will likely influence the USD price dynamics and further contribute to producing some trading opportunities.