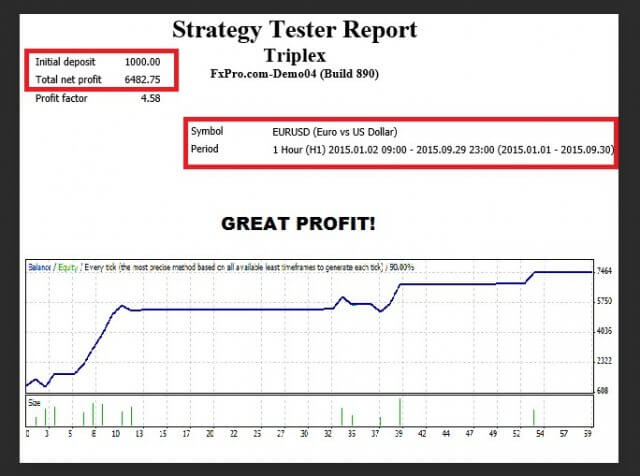 Triplex is an auxiliary tool for manual Forex trading. This Expert Advisor has two operating modes with separate settings, the Community mode, and the Scalping mode. Read on to learn more about how this EA performs, what it costs, and what we truly feel about this service.

When EA is in this mode, EA monitors purchase order lots and sales orders. If several orders are present, the balancing level is calculated automatically, taking into account all possible commissions. This level is identified with a dotted line in the graph (green to buy, red to sell). If there are purchase and sale orders with different lots on the market, then there will be an additional line for the break-even point, common to all orders, drawn (white by default). In this case, the values of Take Profit and Stop Loss are calculated on the basis of the sum of the equilibrium values of purchases and sales.

This mode is perfect for automation of strategies with an average, and also for pyramid and partial position blocking strategies.

Being in this mode, when a position is opened manually, a stop command is placed in the opposite direction at a certain distance, with the batch increase specified in the settings. During movement to the open position, the stop order is dragged with the step, specified in the settings. Once the final stop level has been reached, the order is withdrawn. Take the gain levels and stop-loss are placed for the open order at the distance of the final stop. During an unfavorable movement and the opening of a placed stop command, the next stop order is placed in the opposite direction.

The maximum allowed number of position commands is also specified in the settings. In case the order limit is reached, or in case of insufficient free margin to open the next order, a stop command is placed, accompanied by a final stop and a profit take, for the net open position. It should be noted that during the manual closing of one of the series commands, the entire position will be forcibly closed.

In test mode with the “Test mode enabled” function, the EA opens commands by a signal of the intersection of two moving averages, whose periods can be changed in the settings. This function does not work in a real market and is intended solely for familiarization with different modes of operation.

We have not found any comments or criticism of this robot, so we can not convey the opinions of the users. Although this tool was created in 2015, after 5 years, it seems that there have been hardly any activations of the robot, so it has gone very unnoticed among the MQL user community. We would not risk acquiring a robot with so much ignorance of the same, existing hundreds of alternatives much more contrasted in the market.

If you still want to purchase this tool, its price is 19 USD in the market MQL, having a free demo version.