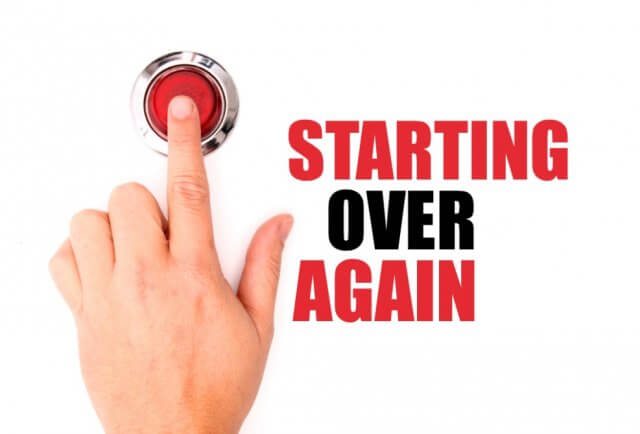 Perhaps you took a long break from trading, lost your entire account balance, experienced several losing trades in a row, or had other bad luck somewhere along the line. Whatever the reason for previously quitting, you might be considering starting over again. Unfortunately, it’s harder to start over with trading than it is to try in the first place – and this sad fact is what keeps many traders from ever trying again. On the bright side, those that have been down on their luck before can actually benefit from starting over.

Wondering how? Those that have already tried something out and failed have a better idea of what to expect. You might have believed in certain myths about trading when you first started, for example, that trading was easy, that you would become rich off a small deposit, or that you should risk a lot on each trade, like with gambling. Your losses would have shown you that these things aren’t true, but this gives you a place to start. Now you can begin with a better idea of what trading is, without believing in the same misconceptions and with more realistic goals.

It’s important to ensure that you do learn from your past mistakes before starting over. If you didn’t spend enough time researching and learning how the forex market works the first time around, be sure to spend plenty of time looking into these facts the next time. You could even check your knowledge with quizzes and practice on a demo account for good measure. If your previous mistake was risking too much on a single trade, you’ll want to spend some time looking at the ways that you manage risk by placing stop losses, only risking 1-2% on each trade, and so on.

If you didn’t stick to your trading plan before, now is the time to do so. Or you might have opened an account with a brokerage that is less than trustworthy, but now you get to begin again and have the option to choose a better company to do business with. Whatever your previous mistake was, your main goals need to focus on overcoming them.

You’ll also want to avoid making the mistake of thinking that you’re immediately ready to start trading again, thanks to the idea that now you know exactly what to change. It’s important to invest time into improving on prior mistakes and to work on your trading plan so that you don’t fail. Even if you previously wiped out your account by risking too much, you still need to brush up on your overall trading knowledge, while paying extra attention to risk management. Try reading articles or watching tutorials that deal with your specific issues, but don’t forget to look at the big picture. You don’t want to start off with improvements in certain areas where you failed before, while using a trading plan that doesn’t work and making mistakes in other areas, otherwise you’ve defeated the purpose.

Starting over can be difficult and you might question whether it’s worth it in the first place. After all, it was hard enough to lose money the first time around and nobody wants to lose money on the same mistake twice. The good news is that traders that have failed before have a better idea of what to expect and know more about their own personal weaknesses, so they know where to focus their efforts for improvement. The first step is to identify your previous mistakes. Then, you should brush up on your trading knowledge, especially if some time has passed since you last traded.

When developing your trading plan, be sure to devote more time to your previous problem areas. From there, you’ll be ready to start over with a newfound confidence in your abilities. As long as you truly devote yourself to starting over, one day you’ll be able to share how your previous defeat was the precursor to your successful trading career.