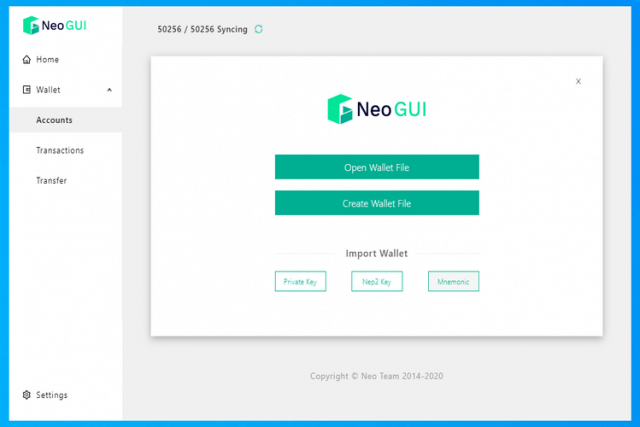 On their GitHub download page, Neo GUI is said to support all the Neo network’s basic functions that include providing professional interaction between wallet and blockchain and maintaining high security for the wallet. But are these claims true? Is the wallet as intuitive and secure as advertised? We answer these questions and tell you everything else you need to know about the Neo GUI wallet in this review:

We start by looking at the basic features:

Full-stack node: NEO GUI is a full-stack desktop wallet that requires you to download the Neo blockchain into your computer.

Synchronize with Neo blockchain: One of the critical factors that distinguish Neo GUI from other GUI desktop wallets is its synchronization with the Neo Network. While most other wallets use remote nodes to connect to the Neo blockchain, NEO GUI directly links to the NEO Mainnet’s user interface. It synchronizes with the network to ensure that transactions initiated on the wallet are recorded on the Neo blockchain in real-time.

Password encryption: During the NEO GUI installation process and when creating the user account, you will be asked to secure the wallet by creating a password. Note that this not only serves as protection for the desktop wallet but also acts as an encryption tool.

Open source: Neo GUI wallet is built on an open-sourced blockchain technology and is open to scrutiny and critique by the crypto community. Therefore, anyone can access the Neo GUI source code from either the wallet’s official website or their GitHub page to view and audit its effectiveness and commitment to security.

Community-led development: NEO GUI is a community-led crypto project with no central governing body. Instead, updates and upgrades to the wallet emanate from the Neon Blockchain community’s suggestions and are led by blockchain technology experts elected by the community.

Anonymous trading: NEO GUI is committed to promoting user anonymity. To this end, the wallet allows for anonymous use of the platform since it doesn’t ask for your personal information when creating a user account, and neither will the blockchain collect and store information that is personally identifiable to you.

Non-custodial: Though the NEO GUI wallet can synchronize with the NEO MainNet and technically offloads most of its critical services to the Neo blockchain, it doesn’t store private keys on your behalf. Rather, it encrypts them and saves them on your computer.

Offline backup: Like most other full-stack desktop wallets, NEO GUI doesn’t provide you with a recovery seed. It nonetheless provides you with two ways of backing up your data and private keys. For starters, you can download the decrypted version of the synchronized blockchain and save it offline or simply copy your wallet credentials on a piece of paper and save them offline.

How to set and activate the NEO GUI wallet

Step 1: Start by downloading the desktop client to your computer. You can download the updated version of this client from the NEO.org website or their GitHub page.

Step 2: The wallet is downloaded as a zip version. Once complete, unzip this file, and start installing it.

Step 3: The wallet will display the user dashboard once complete. Proceed to create a new wallet by clicking on the “wallet” tab and selecting “New wallet address.”

Step 4: The wallet will now require you to choose the database or folder in which you would like to save the file

Step 5: You also need to create a user name and a unique password.

Step 6: Your NEO GUI wallet is now active and ready for use

How to add/receive crypto into your NEO GUI wallet

Step 2: Your public wallet address is visible here. Copy it and send it to the party, sending you Neo coins

Step 3: Wait for your coins to reflect in your wallet.

How to send crypto from your NEO GUI wallet

Step 1: Login into your NEO GUI wallet and access the user dashboard

Step 3: If you do not have any saved addresses, click on the “+” button to add a recipient

Step 4: On the pop-up window, enter the recipient’s wallet address on the “Pay To” section and the number of coins you wish to send on the “Amount” section

Step 5: Confirm that these details are accurate and hit “OK.”

NEO GUI wallet ease of use

The processes of installing the NEO GUI wallet and creating a user account are quite straightforward. Its user dashboard is also easily navigable and quite beginner-friendly. Nevertheless, we must mention that synchronizing the desktop wallet with the Neo Network takes time and can be overwhelming for a novice crypto trader/investor. Plus, the wallet is only available in English and Chinese languages.

NEO GUI wallet is Neo-Specific and will only support the blockchain’s native token or any other cryptocurrency built on the Neo Network.

Currently, the wallet only supports NEO coins, Gas, the NEP-5, and NEP-6 tokens.

NEO GUI wallet is free to install and doesn’t charge you for storing private keys. However, you will be charged a network fee every time you send Neo coins from your wallet. The fee is highly variable and depends largely on the type and the amount of coin/token you wish to process.

What are the pros and cons of using the NEO GUI wallet:

NEO GUI and the Neon wallet are similar because they are both Neo-specific and are also desktop crypto vaults. They are both non-custodial and have put in place similar security features. However, while NEO GUI is a full-stack desktop client, Neon is a light node desktop wallet. Further, while NEO GUI links to the Neo network’s user interface directly, Neon uses remote nodes to access Neo blockchain servers.

Well, we recognize that the full stack desktop client has put in place several highly effective security measures aimed at guaranteeing the safety and anonymity of your private keys. These include allowing for the creation of offline backups, allowing anonymous transactions, storing private keys in the wallet owner’s computer, and securing and encrypting the wallet with a password. These, plus the wallet’s commitment to transparency, are all commendable. However, we must mention that it ignores critical security protocols like two-factor authorization to safeguard your wallet against remote hacks.