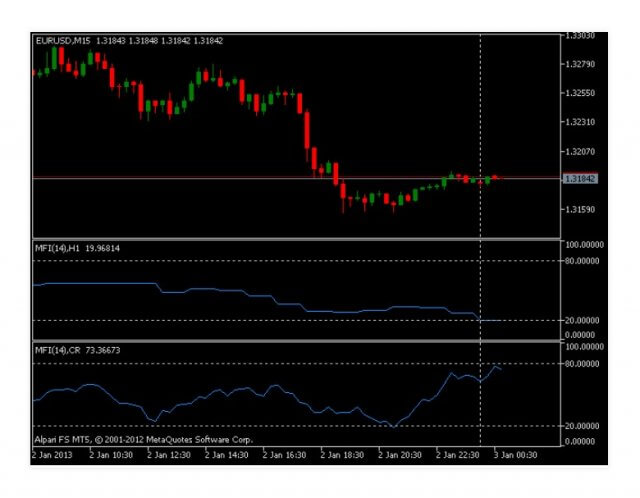 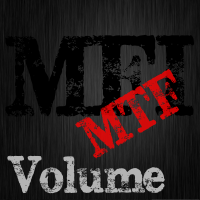 Money Flow Index or MFI is a commonly used oscillator indicator that can generate a few signals for reversals, trend confirmation, and even continuations. The specifics of this MFI is the Multi-timeframe dimension that gives trades more information on the higher timeframe without the need to switch to another chart. This is a very simple indicator modification without any other extras that could make it a versatile tool or an Expert Advisor.

MFI is developed for the MetaTrader 5 platform by Gabor Torma from Hungary who has a total of 18 products released on the MQL5 market. Almost all of his products are indicators transformed to have the MTF component, and even though it Is a simple modification, none of them are free.

Money Flow Index is already included in the MT4 and the MT5 platform by default. As an oscillator, it can show divergencies and to some traders, this is the main function for their trading systems. Divergencies are leading signals, happening before the possible price change and therefore are somewhat less reliable. However, divergencies could be used as a precaution that a trend might be dying out and exit before a reversal or a flat zone. MFI indicator has a volume factor inside its formula which makes it different than the commonly used RSI oscillator. This element makes the MFI more reliable when used for divergencies.

Another aspect of the MFI is the Overbought and Oversold levels, similar to the RSI. These levels are mostly used as reversal signals similarly to the RSI, when the MFI line crosses the 20 level upwards this is a Buy signal, and a Sell signal is generated when the MFI line crosses downwards from the 80 mark. Now, these levels can be placed to 10-90 or 30-70 depending on the trader’s strategy. Overbought and Oversold moments in the Forex market are considered to be nonexistent by a wide group of traders.

The third common use of the MFI is the continuation trade. Trades sometimes set the MFI as the momentum indicator, changing the period and the levels. Once the MFI line moves back into, for example, 30 or 70 level zones, the trend can be considered and continuing as there is enough momentum. This is especially useful since the MFI has the volume factor. 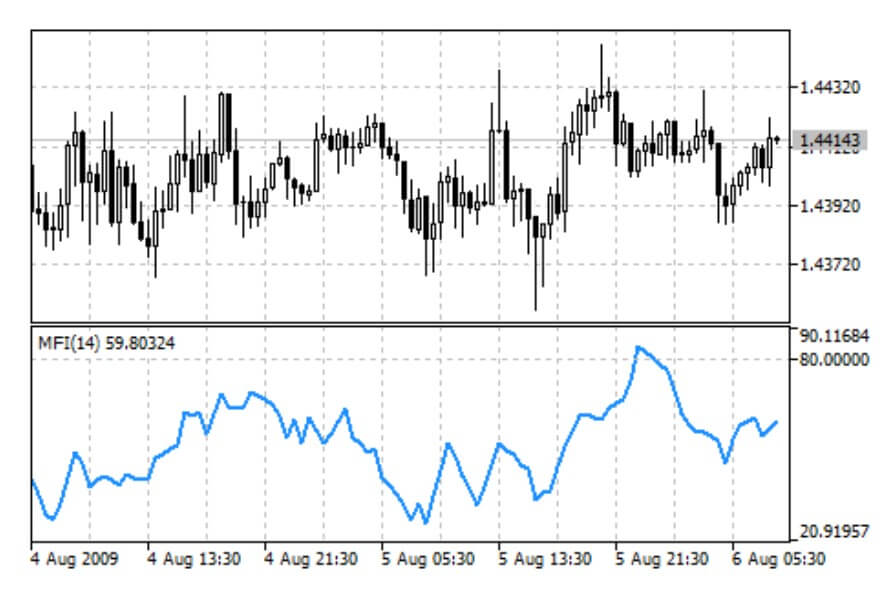 The Overview page is very simple and short for the MTF Money Flow Index, yet enough to grasp all of the features. The MFI indicator formula is not modified, but traders will have optional multi-timeframes not available in the MT4, just within the MT5. Since this altered product is made for the MT5, all of the possible higher timeframes can be set. So, for example, you may want to have one MFI on the current timeframe, which can be done just by adding the default MFI, and add this MTF MFI and set to calculate on a higher timeframe.

Even better, you can mix the two on in the same indicator window giving you the ability to see the MFI lines crosses as another signal generator. You do not have to stop there and you can add a third one on an even higher timeframe or change the period parameter, making a new structured indicator you may find uniquely useful.

As for the setting panel, the only addition if the multi-timeframe parameter. The developer also suggests using the Every Tick method when testing your custom indicators made out of this one. The developer has an MTF converter he is using on various indicators and has published them on the MQL5 market, for a price. Now, most of these small alterations of the default indicators such as the MFI can be found for free on the internet.

The price for Gabor Torma’s conversion is $12.99, which is quite affordable. There are currently 5 activations. There are no rental options and the demo version which is available has been downloaded 47 times as of this writing.

If you are looking for an indicator not widely used to have the MTF component, then you may need a coder that should make this easy work on your indicator. The product has been some time on the market, from 7th January 2013, for this period it has not received any reviews or comments. It has probably never been bought for reasons stated above.

This Forex service can be found at the following web address: https://www.mql5.com/en/market/product/606