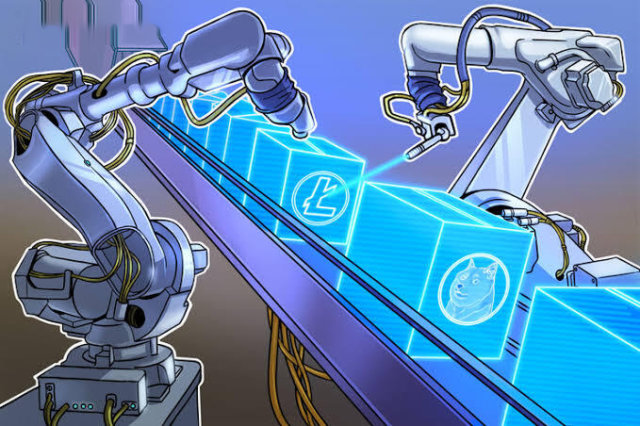 Bitcoin and Litecoin are two of the most popular cryptocurrencies. Bitcoin has long maintained peak position in market capitalization, with Litecoin not far behind as the sixth-largest. Both cryptocurrencies also experience a major event every four years. This event is block rewards halving – in which miners’ rewards are slashed by half.

As a result, there’s a decreased incentive for miners to keep supporting and securing the blockchain networks as block rewards diminish.

Merged mining presents a potential solution to this problem.

What is merged mining, though? What springs the idea, and how can it mitigate halving effects for Bitcoin and Litecoin? This explainer seeks to address those questions, along with a scoop of more on this merged mining phenomenon.

Merged mining, a.k.a Auxiliary Proof of Work (AuxPoW) is the process of mining two or more separate cryptocurrencies at the same time. The idea is to do so in a way that does not affect the mining performance on the blockchain of either coin. The concept of merged mining is lately a hot topic in the blockchain sphere – but it’s by no means a novel concept.

Satoshi Nakamoto – the brains behind Bitcoin, had earlier on envisaged the idea of merged mining. In a 2009 post in the BitcoinTalk forum, he shared that “I think it would be possible for BitDNS to be a completely separate network and separate blockchain, yet share CPU with Bitcoin. The only overlap is to make it so miners can search for proof-of-work for both networks simultaneously.”

Merged mining is based on the premise that work on a particular blockchain can be accepted as legitimate on a different chain. Each chain trusts and accepts the other’s work in the verification of data and transactions as well as the addition of new blocks. One blockchain provides proof of work – and this is the parent chain, and the other chain leverages this work and treats it as legitimate. This chain is called the auxiliary chain.

What Does Merged Mining Entail?

To begin with, merged mining relies on the involved cryptocurrencies utilizing the same algorithm. This means, for instance, that coins that use the same algorithm as Bitcoin – the SHA-256, can be co-mined with it, provided the right technical procedures are in place. Usually, the parent blockchain doesn’t need to undergo any sort of modification. The auxiliary, or child blockchain, is the one that needs programming so the two chains can “trust” each other.

At the time of writing, only three examples of AuxPow exist. These are Bitcoin-parented Namecoin, Litecoin-parented Dogecoin, and Myriadcoin – which is parented by both Bitcoin and Litecoin.

Can Merged Mining Mitigate Halving “Shock” for Bitcoin and Litecoin?

When it comes down to it, halving means reduced rewards for crypto miners. For instance, Charlie Lee, Litecoin’s creator, reflected on this scenario in July 2019 before Litecoin’s halving the following month. Interviewing for crypto site Mickey, he acknowledged that halving is always a “shock to the system,” explaining: “When rewards get cut in half, some miners will not be profitable and they will shut off their machine…” And though Litecoin has since bounced back, it’s hard to predict the future of Litecoin in subsequent halvings.

Also, as Bitcoin’s next halving edges closer – when block rewards drop to 6.25, it is expected the event will have a ripple effect on the entire Bitcoin ecosystem. Although the market sentiment will likely be bullish, the question about future halving effects for the cryptocurrency remains open-ended.

But what if there was a solution? Could merge mining be the answer for the halving conundrum?

A study by Binance Research, the research arm of leading crypto exchange – Binance, explored the possibility of merged mining to mitigate the effects of Bitcoin and Litecoin halving.

In the July 2019 report, Binance research determined that merged mining could increase mining rewards for both cryptocurrencies in light of future halving. Per the report, smaller blockchains could also benefit from AuxPoW by gaining access to better security enabled by bigger blockchains. They can also reduce the expenses needed to run a separate mining ecosystem.

In the same report, Binance explored how Dogecoin has held its own since adopting AuxPoW – in a bid to illustrate how merge-mining can be beneficial.

Dogecoin, the meme-inspired cryptocurrency, provides us with an excellent case study of merged mining, owing to its status as the most successful coin in this category. Launched in December 2013, the crypto adopted AuxPoW in July 2014. As Litecoin miners forked over their operations to integrate DOGE, the latter’s hash rate started ballooning, reaching well over 1500% that September.

Since then, both cryptocurrencies’ hash rates have moved in close correlation – with the exceptionally high correlation coefficient of 0.95. The two cryptos have also mirrored each other pretty closely in mining difficulty, difficulty ratios, and daily transactions. Also noteworthy is the fact that after some new mining pools started mining only Litecoin in 2017, a sharp deviation between the two hash rates occurred.

Still, merged mining is nothing near a cure-all for miners, or challenges currently facing blockchain, as the research warned. Below, we’ll take a look at the good and the bad of AuxPoW in greater detail.

Miners have the motivation to keep mining, thanks to the ability to earn extra income without doubling up on expenses

The cryptocurrencies involved get a liquidity boost, thanks to miners clearing transactions for both blockchains at a faster rate

Auxiliary blockchains benefit from enhanced security provided by the parent chain, but still, get to keep their distinct chain

Auxiliary chains are catapulted to mainstream recognition thanks to their association with larger, more established chains

Some miners might not warm up to the idea of supporting child chains, as this would require them to adjust a lot of their mining operations. This takes time and money.

Some miners might not perceive child chain cryptos to hold a lot of promise. For this reason, there might be little incentive to adopt and support auxiliary networks

Some miners, especially new ones, might be entirely unaware of merged mining and the potential to make more from the technology

Child chains might become overly dependent on the parent chain, hamstringing their development and adoption of scalability technologies

If not enough miners from the parent chain fork over to the child chain, the merged-mining model is vulnerable to a 51% attack

Merged mining sounds like a promising proposition for blockchain. Bitcoin and Litecoin networks could utilize the technology to secure their future, while up and coming blockchain networks could hop on the train and get exposure, enhanced security, and more. Admittedly, technology has its flaws, but the promise trumps the peril.