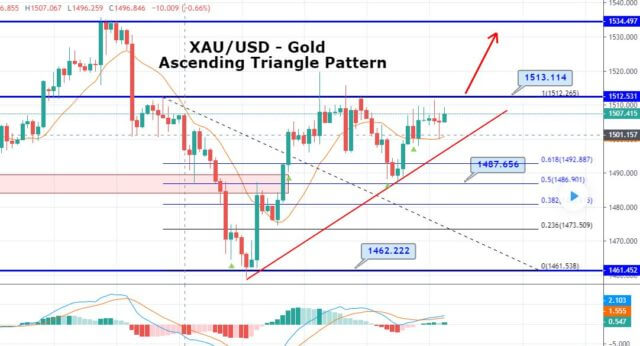 On Wednesday, the precious metal gold prices trade sideways in a narrow trading range of 1,512 – 1500 in the wake of mixed economic events. Moreover, the uncertainties encompassing the United States and China trade war and dark Brexit headlines depressed investors’ sentiment. The gold futures for December delivery gained 0.5% to $1,511.83 at the start of the European session.

A report came from South China that China stepped back from the high-level trade talks between the United States and China. The report said the Chinese delegation might enter in Washington a day earlier than scheduled.

China also gave warning that they would hit back after the United States blacklisted a list of Chinese tech companies in the wake of China treatment with Muslim minorities, which ultimately threats increased incoming talks between the United States and China.

On the Brexit front, German Chancellor Angela Merkel told Boris Johnson, U.K.’s Prime Minister, that Northern Ireland has to continue being part of the customs union in any deal, which Johnson said has paved the way for a no-deal Brexit.