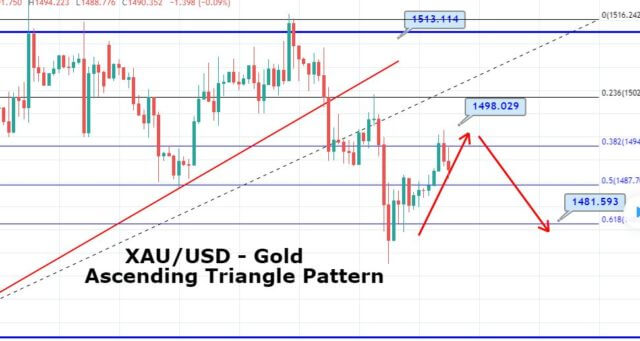 On Monday, the safe-haven metal prices rose but remain below the level of $1500 as the United States and China completed one round of trade meetings, and the United States planned to delay tariff on Chinese goods this week. Gold contract slipped 0.2% to trade at $1,491.35.

The U.S. President Donald Trump sketched the first round of a deal to settle the protracted Sino-U.S. trade war and halted a vulnerable tariff hike, the most significant step by the two nations in 15 months.

In return for the U.S. decision to delay tariff, China agreed to buy $40 billion and $50 billion in U.S. agricultural goods. More steps will be reached in the second phase, the president said.

The safe-haven metal prices swiftly dropped after the report came that the investors adopted the risky assets and dropped the safe-havens.

Technically, the Fibonacci retracement levels are playing a significant role. As you can see on the 2-hour chart above, the XAU/USD is trading right below the 38.2% retracement. This level used to work as resistance last week, but now, the same level is working as a resistance.

The closing of a 2-hour candle below 1,496 is suggesting bearish bias among traders. On the lower side, gold may find support at 1,486 and 1,480 level today.