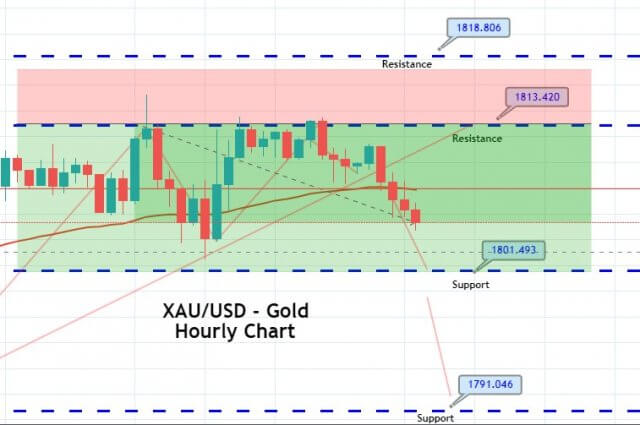 The safe-haven-metal prices unchanged above the $1810 level and erased some of its gains on the day, mainly due to the modest upbeat market sentiment backed by the continued hopes of a COVID-19 vaccine. However, the yellow-metal losses could be short-lived as worsening of the virus situations in America and Japan not showing any sign of slowing down.

On the other hand, the broad-based U.S. dollar took fresh bids on the day mainly driven by the concern about worsening U.S.-China relations over the control of advanced technologies and the protection of civil liberties in Hong Kong, which became a key factor that kept the gold prices under pressure. The yellow metal price is trading at 1,808.88 and consolidating in the range between 1,808.32 – 1,813.47. However, traders seem cautious to place any strong position ahead of the U.S. key data.

The modest upbeat market sentiment could be associated with the recent reports that U.S. President Donald Trump privately refrained from imposing further sanctions against Chinese entities involved in enacting Hong Kong’s national security law while saying that he does not want to aggravate tensions with China further. Despite Trump’s positive comments, the tensions remain on the cards as China threatening to retaliate after Trump also stripped Hong Kong of its special trading privileges and signed an executive order for initial sanctions on Tuesday.

On the negative side, the market sentiment took a hit as Shares in China declined 1.06%, and Australian stocks dropped 0.22% after the country’s jobless rate jumped to the highest since the late 1990s. Shares in Hong Kong and Seoul also fell. Wheres, the second wave of coronavirus infections, is also triggering a return to restrictions on business activity that threaten economic growth.

Despite the continued surge in the number of coronavirus cases globally and the ongoing Sino-American conflict, the market traders cheered the optimism concerning the COVID-19 vaccine, which was triggered after the upbeat signals form Moderna and U.S. President Donald Trump’s comment concerning the COVID-19 vaccine. Dr. Anthony Fauci, the leading expert on infectious diseases in the U.S., also hinted that the country would meet its goal regarding COVID-19 vaccine by year’s end, spurring hopes of an economic recovery.

Apart from this, Russia also completed early-stage trials of a COVID-19 vaccine, which also add some strength to the upbeat sentiment developed by the First Moscow State Medical University and the Main Military Clinical Burdenko Hospital, the vaccine reported optimistic preliminary results on Wednesday.

Considering the worse situation of ever-increasing coronavirus numbers and an ongoing tussle between the US-China, witnessed by the 0.5% decline in the S&P 500 futures, the broad-based U.S. dollar gained positive traction and took bids on the day as investors turn towards the safe-haven asset. However, the U.S. gains kept the gold prices lower as the price of gold is inversely linked to the price of the U.S. dollar. Whereas, the U.S. Dollar Index that tracks the greenback against a basket of other currencies gained 0.01% to 96.032 by 10:12 PM ET (3:12 AM GMT).

Moving ahead, the yellow metal could continue to trade in confined range heading into the key U.S. Retail Sales release. Whereas, the smaller-than-expected rise in the data could further depress the market mood and weigh on the global stocks and accelerate the recovery momentum in the U.S. dollar, which could keep the gold prices under pressure. However, the bearish trend in the gold could be short-lived amid looming virus risks and US-China escalation.

The gold may trade with a bearish bias below the 1807 resistance level. The 50 EMA and MACD are supporting selling bias in gold. While the gold may face a hard time to violate the 1801 support level. Here’s a quick trade plan to follow.