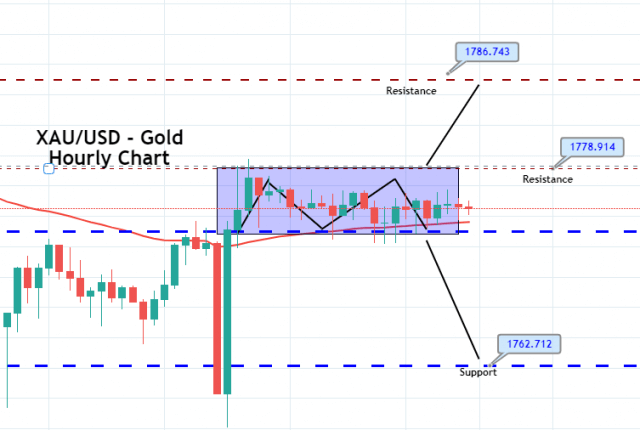 The safe-haven-metal prices failed to stop its previous day losing streak and remained depressed around $1772 from the multi-year highs level, mainly due to the risk-on market sentiment that was backed by the release of positive data from the U.S. and China. On the other hand, the ever-increasing number of COVID-19 cases globally and simmering tensions between the U.S. and China turned out to be the key factors that kept a lid on any additional losses in the gold prices. However, the selling bias surrounding the U.S. dollar might turn out to be the only factor giving some support to the dollar-denominated commodity (gold) and limiting deeper losses. The yellow metal prices are currently trading at 1,773.74 and consolidated in the range between the 1,772.95 – 1,777.16.

At the U.S. data front, the report of NFP showed that the U.S. economy built 4.8 million jobs in June against market expectations of 3 million. Whereas, the previous month’s reading was also recovered higher to +2.699 million as against 2.509 million reported earlier. In the meantime, the unemployment rate dropped more than expected to 11.1% from 13.3% previously, which boosted the investor’s confidence as they believe that the worse of the coronavirus pandemic was behind us.

At the China data front, China reported a Caixin Services Purchasing Manager’s Index (PMI) of 58.4 for June on the day, which surpassed the previous month’s readings of 55. Let me remind you; this was the highest PMI reading in two months.

On the other hand, the optimism about the positive results from the potential COVID-19 vaccine has remained supportive of the market mood, which tends to weaken demand for traditional safe havens and exerted some pressure on the yellow metal.

Apart from this, the on-going concerns over a second economic lockdown in the U.S. due to the surging number of confirmed coronavirus cases assisted the yellow-metal to keep a lid on any additional losses.

As per the latest report, the United States reported record coronavirus cases for the 3rd-straight day on Thursday with 52,789 latest numbers. In the meantime, Florida reported 10,109 new cases, while Texas recorded 7,915 new cases during the previous day. The record hike in the virus cases urges the Trump administration to think about the second economic lockdown, which weighs on the economic sentiment. However, this intensifying pandemic situation turned out to be one of the key factors that kept a lid on any additional losses in the gold.

In the meantime, the Hong Kong activist Nathan Law said during the early Friday morning in Asia that the human rights activists showed concern against Chinese security law and urged global leaders to help get justice. Elsewhere, the latest report suggests that many Hong Kong business people and experts are seriously considering leaving Hong Kong due to China’s crackdown.

However, this matter could exert additional downside pressure on the market’s risk-tone sentiment recently weighed down by the coronavirus (COVID-19) concerns. Whereas, the reason behind previous day declines could also be associated with the reports that showed India’s imports dropped 86% YoY in June. At the data front, the world’s second-biggest consumer of the yellow-metal imported around 11 tonnes of gold in June, down from 77.73 tonnes a year ago. In the meantime, the June imports dropped to $608.76 million from $2.7 billion a year ago as per value terms.

The precious metal gold technical side hasn’t improved a lot. Overall, the XAU/USD is trading in a broad trading area of 1,776 to 1,766 levels. The bullish trendline on the one hour chart is supporting the bullish sentiment in gold. On the lower side, support for gold commands around the 1,759 and 1,749 levels. On the other hand, a bullish breakout on the 1,776 level could lengthen the buying bias to the 1,789 mark. Looking at the technical indicators, the RSI, MACD, and 50 periods EMA are supporting the gold’s bullish bias today. Good luck and happy weekend!