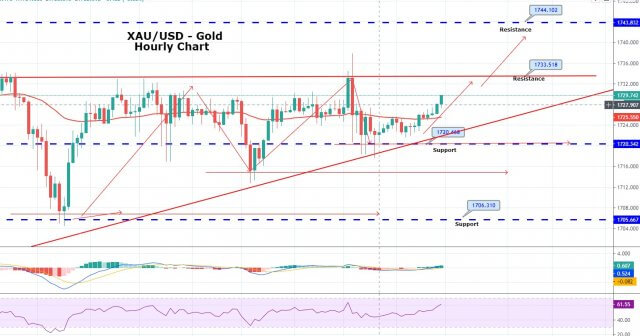 During Friday’s early Asian trading session, the safe-haven-metal prices still consolidate into the overnight confined range around the 1,725 level, mainly due to mixed trading sentiment in the market. However, the bullish trend in the yellow-metal remains as long as it trades above the $1700 level. The prices of gold dropped sharply yesterday from the high of 1738, mainly after the upbeat U.S. data and positive reports from China that they overcame the coronavirus outbreak.

As of now, the reason for the modest gains in the gold prices could be attributed to the fears of the second wave of COVID-19 and geopolitics tensions. At the press time, the yellow metal is currently trading at 1,726.16 and consolidates in the range between the 1,721.59 – 1,727.41.

As we are all well aware that the weekly jobless claims report showed an improvement compared to the previous week’s figures. However, the minor declines were backed by the pace of re-openings across the U.S. Weekly first-time unemployment claims dropped by 58,000 to 1.508 million in the week ended June 13, which provided some support to the risk sentiment.

The fears over the coronavirus resurgence remain on the card as Beijing reported 25 new COVID-19 cases on Thursday, while the Xinfadi market now faced almost 200 cases so far, which overshadowed the optimism over the ‘under control’ situation, as said by the Chinese official on Thursday.

Despite US-China having political differences, both sides recently showed a willingness to keep talking on the trade deal, which exerted some positive impact on the risk sentiment and becomes one of the major factors that holds a lid on any further gains in the gold prices.

The yellow metal gold is currently trading with a bullish bias, crossing above a substantial resistance area of 1,731. Above this, bullish bias can be seen until the next resistance level of 1,733 and 1,737. While the closing of candle or violation of 1,731 will extend buying until the next target level of 1,744. Consider this, we took a buy trade at 1,729 level today.