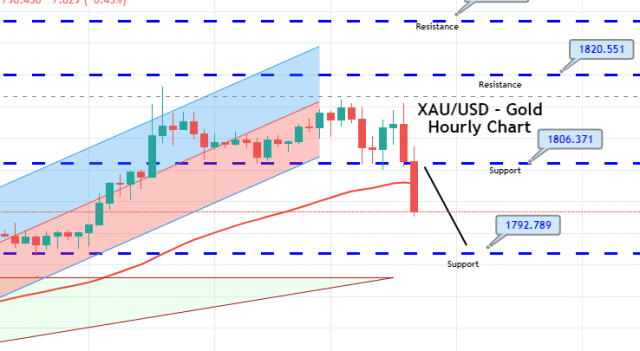 The safe-haven-metal prices stuck in a trading range of $1,804 to $1,811 after hitting the multi-year high to $1,818.17 in the previous day. At this point, the gold buyers were satisfied, possibly due to the lack of major directives. The yellow-metal have managed a rally from $1,756 to $1,818, a nine-year high, in the last three trading days.

However, the bullion gains could be attributed to the noise surrounding the record surge in the U.S. coronavirus (COVID-19) cases and the Sino-American tension that initially favored the risk-off market tone. As well as, the broad-based U.S. dollar weakness triggered by the declines in the U.S. bond yield, also impressed gold bulls.

The yellow metal prices are currently trading at 1,811.00 and consolidating in the range between 1,806.12 and 1,812.09. However, traders were cautious about placing any strong position due to light trading ahead. The downbeat market sentiment could be associated with the fresh report of coronavirus, which fueled the possibility of renewed lockdown and dampened prospects for a sharp V-shaped global economic recovery.

As per the latest report, the U.S. cases crossed a total of 3.0 million marks with a rise of over 60,000. Moreover, the latest update from the Texas Health Department suggested new cases increase by 9,979 to 220,564 on Wednesday, the biggest daily increase since pandemic started. On the other hand, the coronavirus cases in Tokyo dropped to 75, the first below-100 figure in the last 7-days. Apart from this, Victoria also marked a lower figure of 134 against 191 on the previous day. Moreover, China offered positive vibes about virus cases while keeping its zero virus case level, which helped the equity market limit its losses.

Elsewhere, the risk-off market sentiment was further bolstered by the release of the China data, which showed continued deflation in factory-gate prices. At the data front, China’s producer price index (PPI), which measures costs for goods at the factory gate, was dropped by 3.7% year-on-year in June, against a rise to -3.2% from May’s figures of -3.7%. Meanwhile, China’s consumer price index (CPI), a main gauge of inflation, also decreased by 0.1% month-on-month in June, missing the expected rise to 0% from -0.8%. However, this data report also weighed over the global equity markets, triggered a flight to safety.

However, the tussle between China and the U.S., the U.K., and India remained on the card. The U.S. diplomats continued to attack China with harder policies. Whereas, U.S. Secretary of State Mike Pompeo recently announced visa restrictions on some Chinese diplomats over Tibet issue, which also favored the risk-off mood. In the meantime, the Trump administration official also attended talks with others to undermine the Hong Kong dollar peg to punish China.

Despite the ever-increasing number of new coronavirus cases and the possibility of renewed lockdowns, the broad-based U.S. dollar failed to gain any positive traction and edged lower on the day. Although, the losses in the U.S. kept the gold prices higher as the price of gold is inversely related to the price of the U.S. dollar. Whereas, the U.S. Dollar Index that tracks the greenback against a basket of other currencies slipped 0.16% to 96.213 by 12:21 AM ET (5:21 AM GMT).


On the positive side, the investors were confident about the vaccine race as US Fauci said Phase 3 vaccine trials might begin at the end of July. It should be noted that the researchers around the world are developing more than 145 vaccines against coronavirus. Whereas, there are currently 21 vaccines are in human trials as per the New York Times vaccine tracker.

The yellow metal gold has disrupted the 1786 resistance, and now it’s trading below 1,818 level, which is likely to extend solid resistance to gold today. Gold can trade sideways in between 1800 to 1,819 level today. Bullish bias seems dominant in gold. Good luck!