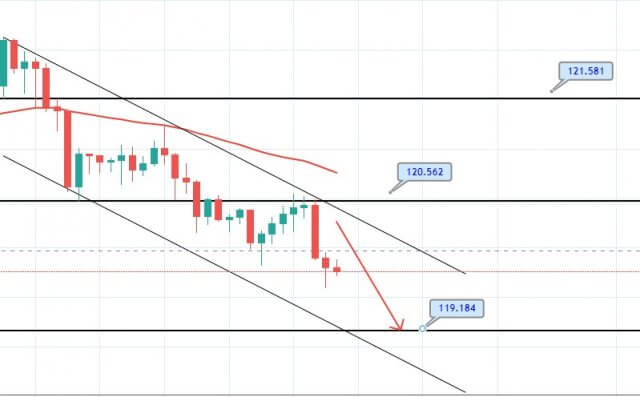 The EUR/JPY extended its previous session losing streak and dropped below 119.785 level, mainly due to increased safe-haven demand of Japanese yen. The reason for the EUR/JPY pair declines could also be attributed to the risk-off market sentiment underpinning the safe-haven Japanese yen and contributing to the currency pair gains.

At this particular time, the EUR/JPY pair is trading at 119.795 and consolidating in the range between 120 – 119.700. However, the risk-off market sentiment was bolstered by the concerns over the second wave of coronavirus infections and geopolitical tensions, which exerted some downside pressure on the risk sentiment, which benefitted the Japanese yen’s perceived safe-haven status.

Besides, there are still no results from any vaccine trials that could stop the deadly disease from spreading as Texas showed a record high jump in the hospitalization likewise, Florida, Arizona, and Oklahoma also showed further cases. Apart from this, Japan’s virus figures rose to the highest since May 30. Whereas, the tension between the US-China was further bolstered by the fresh report that the Group of Seven (G7) leaders, including the U.K., urged China to reconsider their security law to Hong Kong.

Today’s talk between US-China, the top diplomat Jiechi showed aggressive reactions to U.S. Secretary State Mike Pompeo for the U.S. interference in Hong Kong issues, which initially exerted some downside pressure on the risk-tone and contributed to the losses of EUR/JPY.

The EUR/JPY pair edged lower near one-month lows set last week, albeit lacked any strong follow-through selling and staged a modest intraday bounce of around 20-25 pips from the 119.70 regions.

Technically, the EUR/JPY is trading with a bearish bias, having violated the next support level of 120.500 level, which is now working as a resistance. Downward trendline also supports selling bias, and this opens further room for selling until 119.180 level. The RSI and MACD levels are staying in a selling zone, which may further lower the EUR/JPY prices. Thus, we opened a quick sell trade below 120 level during the early U.S. session, which hit the take profit, closing us a nice amount of pips today. Good luck!