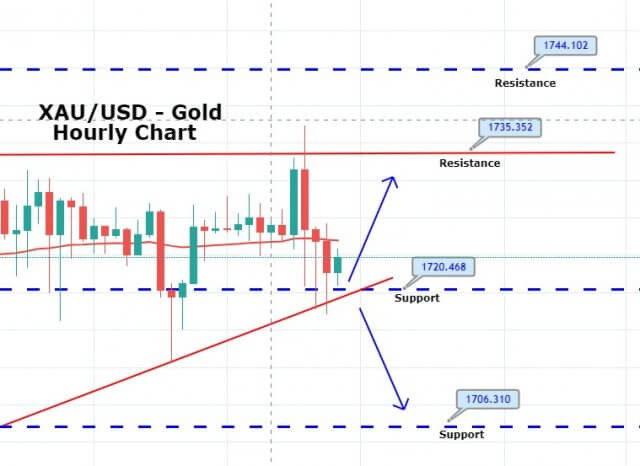 The safe-haven asset failed to break its previous session’s confined trading range near below $1,730 level but erased its some losses from an intraday low mainly due to the risk-off market sentiment triggered by the fresh US-China tension. The second wave of coronavirus (COVID-19) also fueled the risk-off market tone, which eventually provided some support to the gold prices. At the moment, the yellow-metal press is currently trading at 1,724.06 and consolidating in the range between 1,717 and 1,730.07.

At the US-China front, the top diplomat Jiechi warned U.S. Secretary State Mike Pompeo that China strongly opposed the U.S. interfering in Hong Kong, G7 statement on Hong Kong initially exerted some downside pressure on the risk-tone and contributed to the modest gold gains. In the meantime, the Dragon Nation showed a demanding attitude while saying that the U.S. should handle Taiwan related issues carefully and properly. Apart from this, China also said that the U.S. should respect China’s counter-terrorism efforts in Xinxiang.

Moreover, the reason for the risk-off market sentiment could also be attributed to the intensifying second wave of coronavirus. It should be noted that the U.K.’s second vaccine trials seemed failed to provide any notable result to stop the deadly disease from spreading as Texas showed a record high jump in the hospitalization; likewise, Florida, Arizona, and Oklahoma also showed further cases. Apart from this, Japan’s virus figures rose to the highest since May 30.

It’s worth recalling that the Dragon Nation recently impose strict measures on air travel as well as used all the possible ways, including renewed lockdown restriction to stop the deadly disease from spreading.

Moreover, the risk-off market sentiment was further bolstered by the geopolitical tensions between North and South Korea, as well as between India and China, which also had some positive impact on the gold prices. In the meantime, the Asian Development Bank (ADB) trimmed its 2020 growth forecast for Asia from 2.2% to 0.1% also, weighed on the market’s trading sentiment.

As in result, the U.S. 10-year Treasury yields still reported losses around 0.70% while the Asian stocks reported moderate losses by the press time. At the USD front, the broad-based U.S. dollar maintained its earlier gains and stayed above 97 levels mainly due to the growing concern over the spike in COVID-19 cases in China and the U.S. which eventually turned out to be one of the key factors that kept a lid on any additional gains in the gold. Whereas, the U.S. Dollar Index that tracks the greenback against a basket of other currencies moved 0.12% to 97.028 by 11:40 PM ET (4:40 AMGMT).

Looking forward, the traders will keep their eyes on the qualitative catalysts for near-term direction. In the meantime, the virus headlines and geopolitical headlines will be the key to watch.

The yellow metal gold is currently trading with a mixed bias, holding below a substantial resistance area of 1,731. Beneath this, bearish bias can be seen until the next support region of 1,717 and 1,714. While the closing of candle or violation of 1,731 will extend buying until the next target level of 1,744. Good luck!