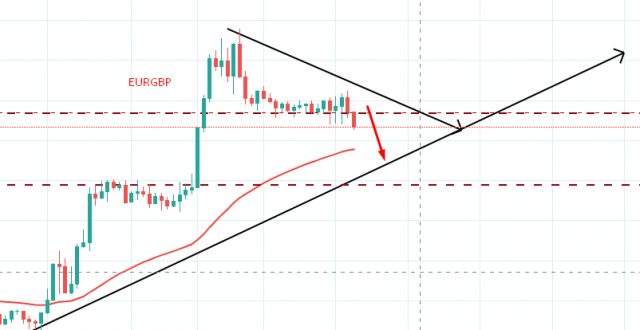 Our forex signal on EUR/GBP is doing pretty well as the pair has dropped to 0.9098 level. The single currency Euro seems to be in a nervous mood, perhaps due to the dovish remarks made by the European Central Bank policymaker Francois Villeroy de Galhau on Sunday, which could further undermine the shared currency and push the currency pair lower. However, the politician said that the monetary policy needed to remain loose until the central bank’s inflation target of 2% was clearly in sight.

It is worth mentioning that the International Monetary Fund (IMF) Chief Economist Gita Gopinath said during the interview with Der Spiegel on Monday that the substantial part of the stimulus package must consist of grants rather than loans. She also said, “In case of more attribution to loans, then it will not promote economic recovery”, this statement exerted some downside pressure on the shared currency.

Apart from this, the reason for the risk-off market sentiment could be associated with the recent report of the coronavirus (COVID-19) outbreak, which suggested the pandemic has already crossed approximately half a million lives. Whereas Texas-registered consecutive seven days of above 5,000 cases by the weekend, whereas California’s State Health Department said cases rose by 4,810 to 211,243 total as of June 27. The figures from Los Angeles County rose by near-record of 2,542 to a total of 97,894 by Sunday.

Technically, the EUR/GBP currency pair has violated the symmetric triangle pattern which is likely to lead the currency pair lower towards 0.9088 and 0.9068 level. The recent three black crows pattern is also supporting the selling bias in the EUR/GBP pair. Here’s a quick trade plan.