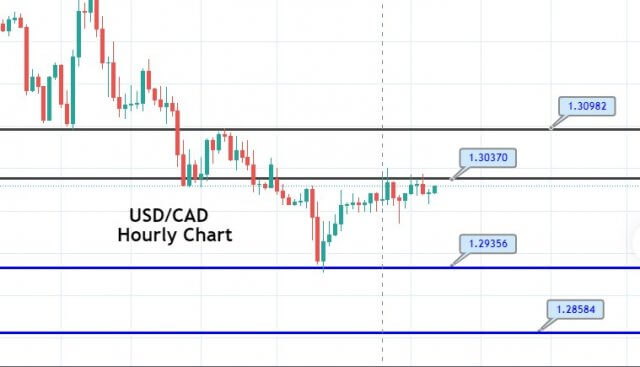 During Wednesday’s early Asian trading session, the USD/CAD currency pair failed to stop its overnight losses and remain depressed around the 1.3030 level, mainly due to the broad-based U.S. dollar weakness. The prevalent downtrend in the U.S. dollar was mainly tied to the confidence over a potential vaccine for the extremely contagious coronavirus disease, which struggling to keep market trading sentiment positive. Moreover, President-elect Joe Biden faces difficulties from Donald Trump, which also weighs on the already weaker U.S. dollar. The reason for the declines in the currency pair could also be attributed to the fresh upward movement in the crude oil prices, which tend to underpin the commodity-linked currency the Loonie and contributes to the currency pair’s losses. However, the crude oil prices were being supported by fresh released upbeat American Petroleum Institute (API) data. As of writing, the USD/CAD currency pair is currently trading at 1.3028 and consolidating in the range between 1.3024 – 1.3037.

As we already mentioned, the market trading sentiment represented negative performance on the day as the sluggish appearance of Asia-Pacific stocks and declines of the U.S. 10-year Treasury yields tend to highlight the risk-off mood. However, the reason behind the risk-off market bias could be attributed to a combination of factors. Be it the worrisome headlines concerning the Sino-US tussle or the resurgence of the coronavirus. The market trading sentiment has been flashing red since the day started, which ultimately keeps the safe-haven assets supportive on the day.

At the US-China front, the tensions between the United States and China still do not show any sign of slowing down as the U.S. imposed fresh sanctions on 4-Chinese diplomats over the Hong Kong Security Bill crackdown initially overshadowed the optimism over a potential vaccine and weighed on the market sentiment. Elsewhere, the declines in the equity market were further bolstered after U.S. President Donald Trump’s push to block election results to confuse optimists.

At the crude oil front, WTI crude oil prices remained well bid around above $41 on the day, backed by the COVID vaccine hopes and the victory of Joe Biden, which boosted the market trading sentiment and demand sentiment the crude oil. Apart from this, China has played a significant role in underpinning global oil demand recovery. They showed that the inventories had declined considerably in recent weeks, indicating the domestic economic recovery. Moreover, the crude oil prices upticks were further boosted after the American Petroleum Institute (API) reported the major draw in crude oil inventories of 5.147 million barrels for the week ending November 6. Thus, the crude oil prices’ upticks underpinned the commodity-linked currency the Loonie and exerted some downside pressure on the currency pair.

The USD/CAD pair is consolidating around the 1.3020 area, testing the resistance level of the 1.3033 mark. On the higher side, the bullish breakout of the 1.3033 level can stretch the buying trend until the next resistance level of 1.3098. While on the lower side, the immediate support stays at 1.3000, and below this, the next support is likely to be found around 1.2935 level. Overall, the USD/CAD isn’t moving a lot as traders are enjoying bank holidays in Canada and the U.S. amid Remembrance and Veterans Day. We may have a thin trading volume and volatility in the market today. Good luck!