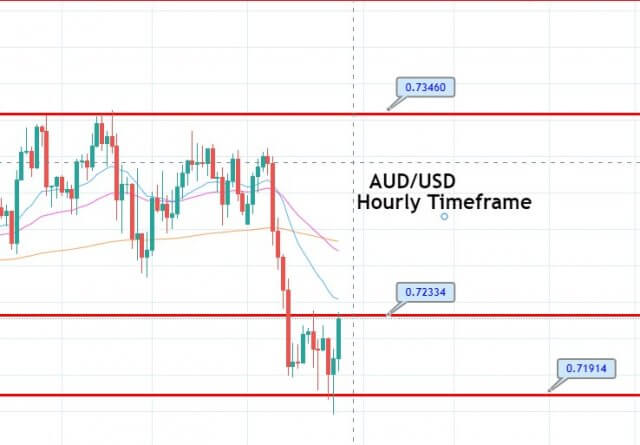 During Tuesday’s early European trading hours, the AUD/USD currency pair failed to erase its early-day losses and took further offers near below the 0.7200 marks, mainly due to the risk-off market sentiment backed by the escalation of tensions between the U.S. and China. Furthermore, the virus worries and the inability to pass the U.S. fiscal package also weighed on the risk sentiment, undermining the perceived riskier Australian dollar and contributing to the currency pair gains.

On the 2nd-day of the week, the Aussie buyers have nothing to cheer. Be it coronavirus woes or the further hardships for the Sino-American trade deal, not to forget the long-lasting inability to pass the U.S. fiscal package, everything has fueled the market risk-off sentiment, which tends to undermine the perceived riskier Australian dollar and contributed to the currency pair losses.

At the US-China front, the long-lasting tussle between the United States and China became further soured after U.S. Secretary of State Mike Pompeo took helps from France, Germany, and the U.K. to reject China’s claims of the South China Sea at the United Nations (U.N.). This eventually exerted downside pressure on the market trading sentiment and undermined the Australian dollar’s perceived riskier and contributed to the currency pair losses.

On the other hand, the struggle of the U.S. Congress to break the stimulus deadlock ahead of the September-end deadline keeps the traders cautious as Democrats and Republicans still have differences over the package’s size. Besides this, the renewed coronavirus woes and fears of fresh lockdown measures to curb the second wave of the outbreak also kept the market trading sentiment under pressure. At the coronavirus front, the coronavirus (COVID-19) resurgence in Europe and the U.K. is picking up further pace, which keeps the fears of the lockdowns on the cards. As per the latest report, the authorities in the U.K. recently announced restrictions over activities. Simultaneously, regional lockdowns have been in practice in some parts of the bloc, and the pubs and restaurants in the U.K. ordered to close at 10:00 PM.

Considering the coronavirus (COVID-19) condition, the BOE policymakers marked their pessimism while the European Central Bank (ECB) President Christine Lagarde and Germany’s Finance Minister Olaf Scholz have already shared its dovish view over the virus. Across the pond, the Fed Chairman’s first version of testimony also cited that the track ahead for the economy remains “highly uncertain”, which in turn keeps the market trading sentiment under pressure and helps the safe-haven assets.

As a result, the broad-based U.S. dollar succeeded in extending its previous session gains and remained well bid on the day as investors turned to the safe-haven in the wake of an intensified tussle between US-China. Thus, the gains in the U.S. dollar kept the currency pair lower. Whereas, the U.S. Dollar Index, which tracks the greenback against a basket of other currencies, edged higher 0.04% to 93.602 by 9:48 PM ET (1:48 AM GMT).

Additionally, weighing on the currency pair could be the RBA Deputy Governor Guy Debelle’s negative comments that lower the exchange rate would surely help the economy. He further added that the economy is currently facing a gradual and uneven recovery. He also noted that the Aussie dollar is broadly aligned with fundamentals, and intervention may not be effective.

In the absence of significant data on the day, the market traders will keep their eyes on the USD price dynamics and coronavirus headlines, which could play an important role in managing the intraday momentum. Whereas, the release of Existing Home Sales and Richmond Manufacturing Index will be key to watch.


The bearish bias dominates the AUD/USD pair as it trades over a double bottom support level of 0.7191 level. Holding above 0.7191 level can extend bullish bias; however, the pair may find an immediate resistance at 0.7234 level. A bullish crossover of 0.7234 level is likely to drive a bullish trend until the 0.7290 level today. On the lower side, the pair may find support at 0.7143 level. The signal is already closed at stop loss, as the bearish breakout setup has become a fakeout setup, and the AUD/USD pair is now moving upwards. Let’s brace for the next trade setup. Good luck!