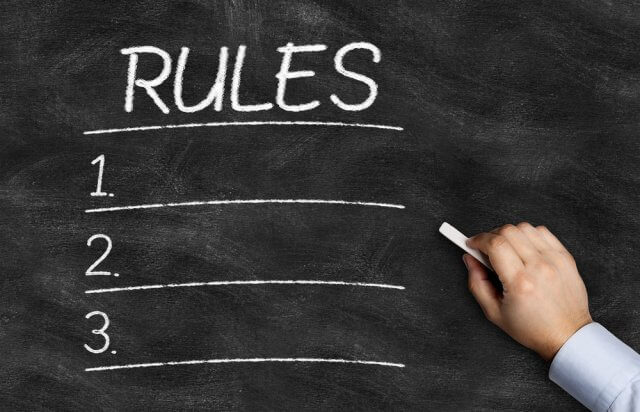 The Elliot Wave theory is a subjective topic. The key to trading Elliot waves is to find and comprehend the waves correctly. By understanding the wave theory correctly, we will be able to figure out which side of the market we have to be on. For doing so, there are a few rules we can lay on the Elliot waves while confirming the legitimacy of a wave. They are based on waves in the 5-3 wave pattern. And most importantly, these rules must never be broken.

Wave 1 is the impulse wave, which is towards the trend, while wave 2 is a smaller corrective wave against the trend. So, to hold the definition of an uptrend, the second wave must never go below the first wave. In other terms, there should be a higher low in the price.

Wave 3 is the second push towards the overall trend. This wave represents the move where all big players buy into the market. Hence, this wave is the strongest and the longest. According to the rule, the wave 3 can be shorter than either wave 1 or wave 5, but not BOTH.

Wave 4 is the second corrective wave in the 5-wave pattern. And this wave should never cross below the area of wave 1. In technical terms, the low of Wave 4 must be higher than the high of Wave 1.

This sums up the rules that need to be mandatorily followed while trading the Elliot Waves. So, even if one of the rules is not satisfied, then the Elliot wave pattern must be counted from the beginning, and the current must be discarded.

🌊 When Wave 5 is the longer impulse wave, then wave 5 can approximately be as lengthy wave 1.

🌊 It is useful in targeting the end of Wave 5. Traders also determine the length of the Wave 1 and add it with the low of Wave 4 and use it as a possible target.

🌊 Wave 2 and Wave 4 will usually be different forms. For instance, if Wave 2 was a sharp correction, then Wave 4 will be a flat correction and vice versa. With this, chartists can determine the time of correction of Wave 4

🌊 After a strong Wave 5 impulse wave advance, the 3-wave ABC correction pattern could come down only until the low of Wave 4.

These are the guidelines traders must understand and interpret in their own meaningful way. With this, we have come to the stage where we can apply the concepts and trade the Forex market. So, stay tuned for the next lesson.