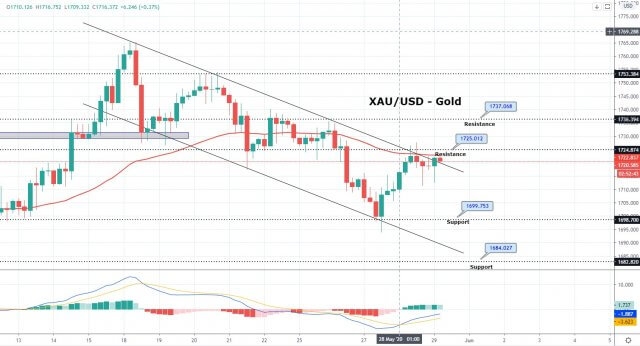 The safe-haven-metal prices took bids and rose to $1,721 while represented 0.15% gains on the day due to the risk-off market sentiment in the wake of intensifying tussle between the United States and China over Hong Kong. As well as, the US dollar selling bias also boosted the yellow-metal. At the press time, the safe-haven-metal prices are currently trading at 1,720.83 and consolidating in the range between 1,712.92 and 1,722.94. However, investors are cautious about placing any position ahead of an expected announcement by President Donald Trump on China later in the day.

It should be noted that the futures tied to the S&P 500, Wall Street’s benchmark index, was down 0.6%. Asian stocks also flashed red with Australia’s S&P/ASX 200 index leading the way lower with a 1.11% decline.

As we all well aware that China has imposed the controversial security law on Hong Kong to curb the City’s autonomy earlier this week. In return, the US had warned that they would impose bans on China if China moves ahead with this law. So, the law has been implemented now, and all eyes are on President Trump’s actions ahead.


The XAU/USD prices are now holding below 1,725 level, which is extending resistance to gold, but the close of recent bullish engulfing candle is suggesting chances of further buying in gold. The downward channel seems to get violated now, and it’s keeping the gold in a bullish mode. We can try to capture a quick buy trade in gold in order to secure profit until 1,728 level. The RSI is also taking an upward turn and may cross below 50 to supported selling bias.