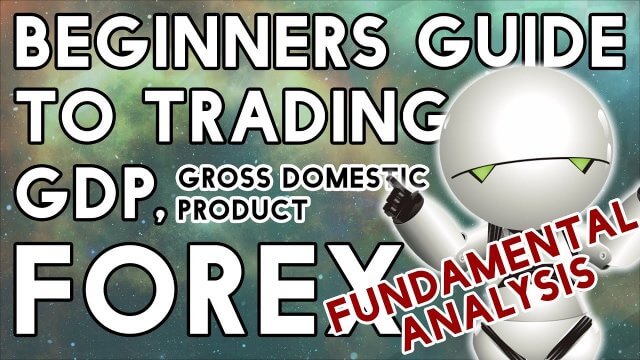 Gross Domestic Product, which is commonly referred to as GDP, is one of the most important features of fundamental analysis.
New traders often skip fundamental analysis, preferring to learn a few technical analysis setups and hoping they will be able to ‘wing it’ and make money that way.

However, fundamental analysis is just as important, if not more so, than being able to learn to trade simply by looking at setups on a chart. At the very least, the two go hand in hand, and it is thoroughly recommended that new traders learn both sides to trading.

So what is Gross Domestic Product or GDP, and how should it be applied to trading currency pairs within the forex arena?
Quite simply, GDP is a measurement of a country’s financial health. It usually fluctuates from month to month and is updated by way of released economic data each month for market analysts and traders to view and where the results will likely affect how its currency exchange rate moves up and down against other currencies in the Forex market. This will, therefore, potentially impact on your trades, with regard to opened trades or those in the process of being opened. And so it is imperative that you learn about the GDP for both currencies – remember they are always traded in pairs – that you are trading, or thinking of trading. This also means that you must be aware of when these monthly data releases are happening.

What aspects make up GDP? 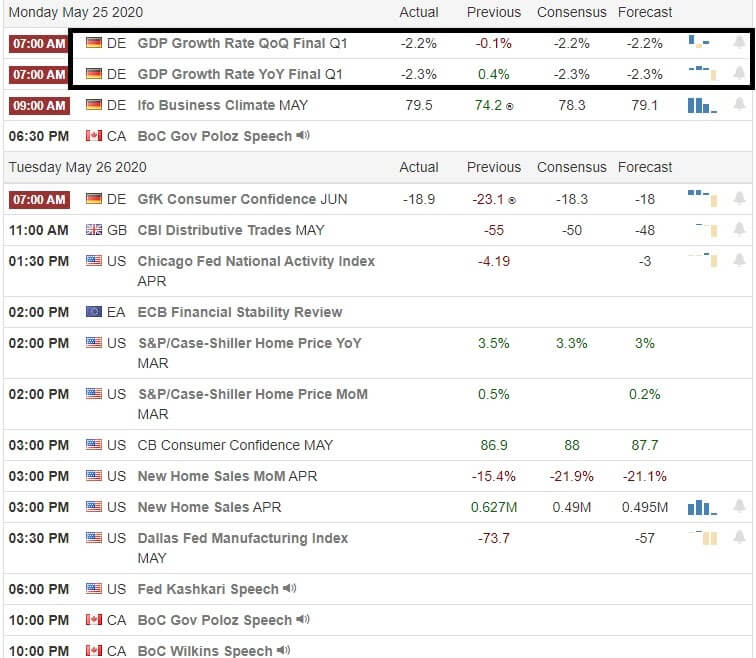 You will find GDP release information on your economic calendar, and it will provide you with the anticipated levels of GDP and show you the importance. So here we can see that German GDP YOY – or year on year came in at – 1.9% and had a market level of importance at medium but where the quarter on quarter figure came in at -2.2% and was considered as very important as it shows how Germany is coping during the pandemic.

GDP is updated then compared month by month, then quarterly and annually. It is based on the monetary value of goods which are produced and sold and services which are provided. Some of these goods and services will be sold within the country, and some will be exported.
But the consumption of these is referred to as consumer spending. GDP also takes into account investment into the country and government spending. It then takes the total value of all exports and deducts imports, and what is left is known as real GDP. This figure can then be further divided on a per capita basis or per individual, and all of this gives an overall picture of the financial health of a nation.

How to trade with GDP data

Essentially, if a country’s monthly GDP data is released as per market expectations, the fundamentals

should already be in the price action. That is to say, there should not be any shock factor, and price action movement should, theoretically, continue with technical analysis.
If the GDP comes in weaker than expected, it would be bad for an economy, and therefore, the price action of that country’s currency should weaken against any counter currency being traded.

If the GDP is better than the market forecast, the country’s currency should strengthen.
Ironically, we are in the most difficult of times currently, with a lot of countries’ GDP being decimated by the Coronavirus. So how does this impact on a country’s currency? At the moment, investors are trying to find ways of looking at how governments are handling the crisis and what level of money they are leveling at their country’s to prop them up and help individuals and companies to stave off bankruptcy. And therefore, this form of fundamental analysis has never been so fraught with danger in regard to using it to trade currencies. It is probably better to stay on the sidelines during these types of news releases until such time as some normality has returned to the world. But, GDP – especially if it comes in at an unexpected level – will always be a market mover, so be warned.