What is Blockchain, and how is it different from cryptocurrencies?

As both the concept of blockchain and cryptocurrency are new to the general public, many people started to use it interchangeably. However, using them in this manner is wrong. Part of this confusion can be attributed to how these terms came into use, instead of being introduced by their formal definition and distinguished as different. Let’s delve deeper into how these two terms are different and what they mean exactly. 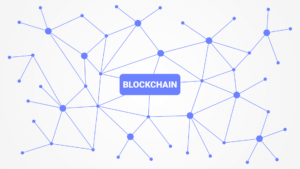 What is blockchain?
Blockchain (originally blockchain) is a distributed ledger technology. It is basically a list of records called blocks, which are linked using cryptography. Each block has transaction and message information bundled within it. These blocks are then validated and posted on a transaction chain next to the previous blocks in the chain. Blockchain permanently records every single detail, and stores it.
When Bitcoin was the only blockchain as well as the only cryptocurrency, there wasn’t much of a need to make a distinction between the terms. For this reason and for people to understand the concept and what it represented easier, the terms “blockchain” and “cryptocurrency” were used interchangeably. As time passed and the technology matured, the distinction had to be made. The uses of blockchain quickly diverged from the pure money aspect to ideas such as decentralized name registry, delivering messages in a discrete way, etc.

The difference between cryptocurrency and blockchain. 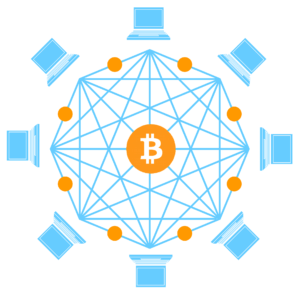 The differences between cryptocurrencies (Bitcoin will be taken as an example), and blockchain can be shown in this comparison:
Definition – Bitcoin is a cryptocurrency. A bit over a decade has passed after Bitcoin was created, and the world is full of altcoins, all trying to add value to the market by trying to fix a problem in the world.

Blockchain, on the other hand, is a kind of distributed ledger technology which records transactions between efficiently and permanently. Blockchain became known as the technology that enables the existence of cryptocurrency as we know it.
Main aim – Bitcoin’s whitepaper clearly states the intents of Satoshi Nakamoto for this cryptocurrency. It was created so it could speed up the cross-border transactions while reducing the government’s control over the transaction and simplifying the process by removing the third-party intermediaries.
Blockchain is a technology that should be used to provide a cheap, safe, secure, and transparent environment for peer-to-peer transactions. As a distributed ledger, blockchain offers a reliable way to store data as well as to access it.
Use-case – Bitcoin is a cryptocurrency that intends to be used as a medium of exchange, store of value, unit of account, and standard of deferred payment. However, it is not there yet, but it might be in the future. Even so, Bitcoin is a currency and can only be used for transacting itself. 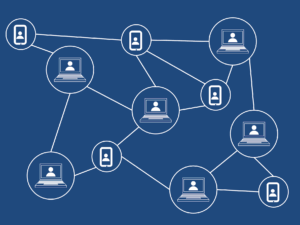 Blockchain has a much wider range of usability as it can be used for transacting information, property titles, stocks, etc. Many industries are exploring blockchain as a valid upgrade to their existing systems.

Why people abuse and overuse the term blockchain
With so many projects looking for a solid marketing strategy, blockchain came at the right time. Many companies have used the word “blockchain” to describe their new business model improvements. This brought them immense popularity on the stock market and in general. However, is this increase in the popularity of these companies justified, or just based on a buzzword?
Blockchain is an amazing concept and an overall improvement in almost every way when compared to what companies work with nowadays. However, it does require a couple of key factors that cryptocurrencies such as Bitcoin offer and add to it.
Bitcoin is trustless, borderless, immutable, decentralized, and transparent. Blockchain and Bitcoin work together to create all of these characteristics. However, they do not work as well without each other. Blockchain would not be trustless or decentralized if it would be used by companies, as they would control it and its transactions. Blockchain turns into nothing but an online ledger. It does not get supported by all of the aforementioned characteristics.

Both Bitcoin and Blockchain can be considered revolutionary and a step ahead in the development of society as a whole. These two innovations cannot be used interchangeably, but they should surely work together to bring their best to the game.