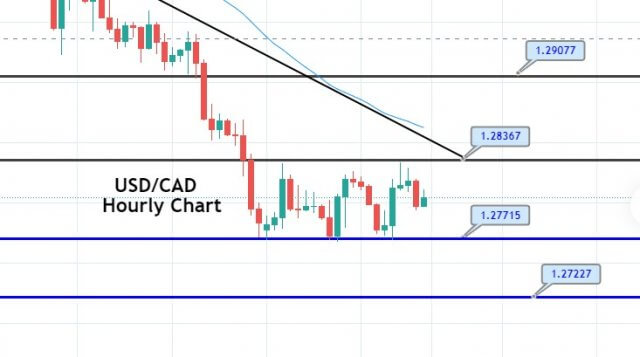 The USD/CAD pair was closed at 1.28179 after placing a high of 1.28332 and a low of 1.27691. The USD/CAD pair was choppy on Wednesday as it dropped to weekly lows in the early session but recovered all of its losses in the late session. The Bank of Canada released its interest rate decision on Wednesday that drove the USD/CAD pair lower in early trading hours. Later the crude oil prices and the strength of the US dollar pushed the pair higher on board.

On Wednesday, the Bank of Canada held rates at 0.25% and reiterated intentions to keep interest rates at the same level until at least 2023 as the Canadian economic recovery from the coronavirus pandemic was proceeding in line with the expectations.

The Bank of Canada said that the news on the development of effective vaccines provided reassurance that the pandemic will end and more normal activities will resume, although the pace and breadth of the global rollout of vaccinations remain uncertain. However, there were no surprises on Wednesday from the Bank of Canada that weighed on Loonie and supported the upward trend in the USD/CAD pair.

Meanwhile, the declining crude oil prices on Wednesday after the release of US Crude oil stockpiles data weighed on Loonie. For the last week, the US crude oil inventories raised to 15.2M against the expectations of -0.9M and weighed on crude oil prices that added losses in the commodity-linked currency Loonie and supported the upward momentum in the USD/CAD pair.

Moreover, the US dollar was also strong on Wednesday amid multiple reasons, including deteriorated risk sentiment from Pfizer’s vaccine adverse reaction on two people, faded hopes for quick delivery of second round of US stimulus measure, and the rising safe-haven demand after the increased number of coronavirus cases in the US. The strong US dollar also helped the USD/CAD pair’s gains to persist in the market on Wednesday.

The USD/CAD pair is trading sideways at the 1.2789 level due to a lack of market volatility. On the lower side, the support holds around the 1.2770 level, whereas the bullish trend continuation can extend the buying trend until the next resistance level of 1.2835. We may not see a further trend in the pair until this range gets violated. On the lower side, a bearish breakout of the 1.2770 level can extend selling bias until the 1.2720 level. It seems like investors are waiting for a solid fundamental to determine further moves in the market. Let’s look for selling below 1.2836 and buying over 1.2770 level today. Good luck!