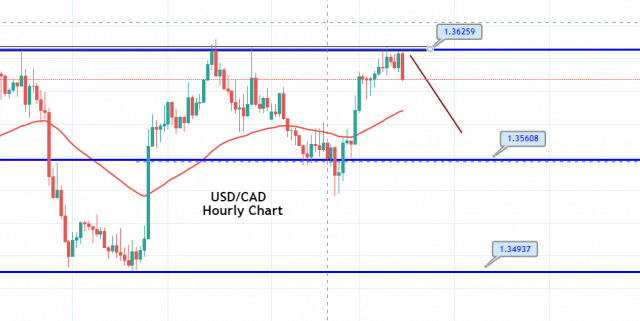 During Tuesday’s early European trading session, the USD/CAD currency pair succeeded extend its previous 4-day winning streak and hit the session high just above 1.3600 level mainly due to the broad-based U.S. dollar strength backed by the downbeat trading sentiment. On the other hand, the reason for the currency pair gains could also be attributed to the weaker oil prices, which eventually undermined the demand for the commodity-linked currency the loonie and contributed to the currency pair gains. At the moment, the USD/CAD currency pair is currently trading at 1.3622 and consolidating in the range between 1.3596 – 1.3646.

Considering the overall market condition, the investors seemed cautious about the ever-increasing number of coronavirus cases globally and the probability of renewed lockdowns restrictions to control the spread, which eventually overshadowed the prospects for a sharp V-shaped global economic recovery. Detail suggests that the number of COVID-19 cases globally passed the 13 million mark as of July 14, according to Johns Hopkins University data, with more than 565,000 people died in the last 7-months due to the virus, as Global institute reports’ tally.

On the other hand, Brazil and India also followed the U.S. footstep. They became nations with the 2nd highest number of appearing cases after the U.S. Elsewhere, the figures from Australia and some parts of Asia were also increasing day by day.

Apart from the Virus woes, the tussle between the U.S. and China over Hong Kong security law remained on the card. It is worth reporting that the U.S. State Department rejected China’s territorial claims in the South China Sea. The U.S. Secretary of State Mike Pompeo blamed China for threatening other claimant states in the South China Sea. As in result, the Dragon Nation also fired shots on the United States while saying that the U.S. was trying to inflame tensions in the disputed waters.

Whereas, the US-China tussle got any additional pace in the last hour after China decided to impose new sanctions on the U.S.’ defense company, Lockheed Martin, in response to planned arms sales to Taiwan. It is worth recalling that the Dragon Nation previously announced tit-for-tat sanctions on four U.S. officials, including senators Ted Cruz and Marco Rubio in return to Washington’s imposed visa restrictions on Chinese officials over the treatment of the Uyghur community in the northwestern province of Xinjiang. These headlines favored the risk-off market sentiment and kept the currency pair gains restricted.

As in result, the broad-based U.S. dollar reported gains and took bids on the day as investors preferred the safe-haven asset mainly due to concerns about the mounting coronavirus cases. However, the gains in the U.S. dollar kept the pair higher. Whereas, the U.S. Dollar Index that tracks the greenback against a basket of other currencies gained 0.03% to 96.537 by 9:36 AM ET (2:36 AM GMT).

At the crude oil front, the WTI crude oil prices remain under strong selling pressure. However, the decline in crude oil could be attributed to the risk-off market sentiment triggered by record-breaking new coronavirus cases in several U.S. states, which eventually overshadowed concern about economic recovery. The bearish trend in crude oil was further bolstered by the expectations that OPEC+ might ease output cuts, which led to a sharp fall in oil prices.

On the technical front, the USD/CAD is testing the double top resistance level of 1.3627 level and closing of candles below this level can drive selling while closing above this can trigger buying trend in the market. We have already opened a sell trade below 1.36131 and the idea is to target 1.35731 take profit today. Good luck